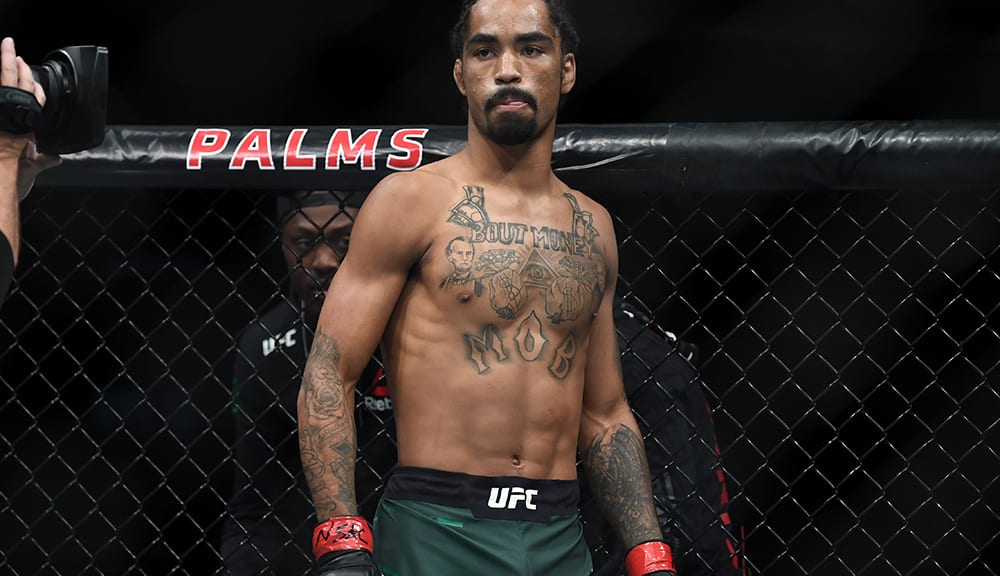 The UFC Ft. Lauderdale main card kicked off with a lightweight contest between Roosevelt Roberts and Thomas Gifford.

As always, LowkickMMA will have you covered with all the results from UFC on ESPN+ 8 from Florida as they happen.

Roberts (7-0) entered this bout as the second biggest favorite on the night. Boasting a -450 betting odd against Gifford who got a +325 on the return as the underdog. The “GoGetta” defeated Darrell Horcher in his official UFC debut last November. (odds via Bovada)

As for Gifford (17-7). “The Young Lion” made his UFC debut in Ft. Lauderdale. He is a veteran of some 60 total combat sports fights. Gifford is comfortable in all areas but prefers the ground.

Roberts looks extremely relaxed to start. Gifford throws a quick jab as Roberts throws a kick. Gifford moves forward and lands a body kick. He lands another leg kick as Roberts backs away. Roberts lands a one-two. He then, shoots a takedown. Roberts ends up in side control defending a choke attempt from Gifford. He looks for a kimura as Gifford defends with his free arm. Gifford looks for a triangle choke, Roberts is defending but Gifford is making is a grappling match here with 90 seconds left. Roberts lands a few hard elbows on Gifford’s head. He stands up but is lured back down by Gifford. Gifford looks like he has an arm with 40 seconds left in the round. He chains submissions but Roberts defends nicely. Roberts blasts some hard punches down. The horn sounds.

Roberts lands a right hand to start round two. Gifford answers with a jab. Roberts opens up with a flurry but the UFC newcomer eats it. Roberts lands another right hand. He sticks and moves. Gifford answers but with far less significant strikes. A leg kick landed by Roberts, then a right hand. Roberts ties up Gifford against the cage, Gifford jumps on his neck and pulls guard. He loses the choke and Roberts looks for offense inside his closed guard. Ben men taking a bit of a breather here. Roberts passes guard with 90 seconds and finds himself defending another triangle choke. However, Gifford doesn’t really have the position. He looks for an arm. The horn sounds.

Gifford takes the center of the Octagon. Roberts lands a left hand, then a right for good measure. He cracks Gifford with a hard three-piece combo then grapples Gifford. The UFC newcomer drags Roberts to the ground. He slowly works to better his position but lets Roberts up. Roberts cracks him with a straight right hand, then dives on a leg. Gifford defends but Roberts is still working for a takedown. Roberts kicks his leg out and scores another trip. He looks for the kimura again then passes into half guard. Less than one minute to go. The fighters throw some weak shots as the fight ends.