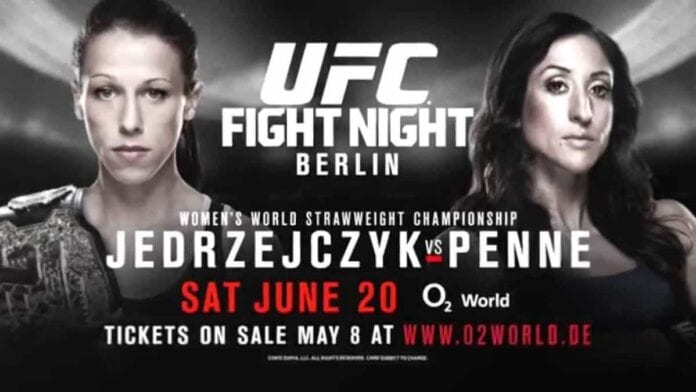 UFC held another event today (Saturday, June 17th, 2015) from the O2 World in Berlin, Germany, in the form of UFC Fight Night 69 and wow what quality of fights did they have for us on the preliminary card. Headlining the card are Joanna Jedrzejczyk and Jessica Penne for strawweight title, but there’s a whole bunch of great fights also taking place on the preliminary section of the card.

Makwan Amirkhani vs. Masio Fullen closed the preliminary card on UFC Fight Pass. Amirkhani got straight to the point as he landed a double leg takedown that led to him getting the back of Fullen and finishing the fight with the rear-naked choke in the first-round.

Alan Patrick vs. Mairbek Taisumov was next in a lightweight bout. A very entertaining fight that saw both men do their thing both standing and on the fight. The fight came to an altering hult when Patrick landed a grazing head kick that put Taisumov on his back. Patrick blitzed him with strikes on the ground to end the fight.

Arnold Allen vs. Alan Omer was next in a featherweight bout. Omer dominated the majority of the fight, but once making it to the third round, Allen reversed a takedown and locked in the guillotine choke for the win.

Niklas Backstrom vs. Noad Lahat was next in a featherweight bout. This was a very entertaining fight that saw both men have their moments in this fight. At the end of the day, if you thought either fighter one or it was a draw, the judges gave the win to Niklas Backstrom by majority decision. Scott Askham vs. Antonio dos Santos Jr. battle in a middleweight bout. Santos pressed the action and was mauled over by Askham with a right hand that dropped Santos halfway into the round. Moments later, Askham landed knee to the jaw then followed it up with strikes to end the fight in the first round.

Scott Askham vs. Antonio dos Santos Jr. battle in a middleweight bout. Santos pressed the action and was mauled over by Askham with a right hand that dropped Santos halfway into the round. Moments later, Askham landed knee to the jaw then followed it up with strikes to end the fight in the first round.

Piotr Hallmann vs. Magomed Mustafaev is up next in a lightweight bout. Mustafaev made his UFC debut and went as planned. Mustafaev used his clinch skills to mix up the savage beating that led to a nasty cut on the left eye of Hallmann. In the second round, the doctor stopped the fight due to the cut.

Opening the UFC Fight Pass prelims is Taylor Lapilus vs. Yuta Sasaki. Lapilus pressed the action early as Sakaki was circling the cage and trying to counter strike with Lapilus. However, Lapilus was having none of it as he put the lights out of Saksi in the second round with a straight left hand.

So join us right here at LowKickMMA for UFC Fight Night 69, kicking off at 12:00 pm ET!