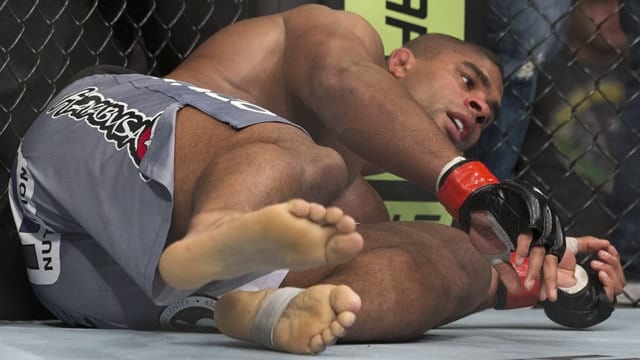 The UFC Fight Night 50 results came in last night (Friday September 5th, 2014) and the event in Connecticut delivered massively. After a reasonably mediocre start to the preliminaries, fans were treated to six straight finishes, and all were both glorious for the winners, and absolutely crushing for the losers. In what turned out to be a highly charged night of action, there are a number of interesting points to mull in the aftermath of Fight Night 50…

Not only was Brazilian grappling ace Ronaldo de Souza facing a crafty veteran last night in Gegard Mousasi, he was also looking to avenge a KO loss that “Dreamcatcher” had handed him in 2008. “Alligator” did so, and in terrific fashion. He looked dominant in his showing last night, and scored a picture perfect third round submission win over the outmatched Mousasi.

The Iranian looked stumped as he couldn’t stop the ground assault from Souza, who has likely punched his ticket to a huge fight with the win. The middleweight title picture got a new contender last night, and with Michael Bisping Headlines UFC Fight Night 55 In Australia” href=”https://www.lowkickmma.com/UFC/luke-rockhold-vs-michael-bisping-official-ufc-fight-night-55-headliner-australia/”>Luke Rockhold booked in against Michael Bisping, could “Jacare” get the shot at the winner of Weidman/Belfort?

UFC lightweight veteran Joe Lauzon broke the all-time record for post fight bonuses last night, as he and Michael Chiesa were awarded ‘Fight of the Night’ honors for their thrilling encounter. The back-and-forth affair was ended in the second, as “Maverick” was unable to continue due to a nasty laceration over the right eye.

“J-Lau” now has an astonishing 13 post-fight bonus awards, making him the most rewarded fighter (in terms of bonuses) in the promotion’s history. Another fantastic showing by Lauzon, as he moves to 11-6 in the UFC, and also extends his win streak to two. Expect a decent level of opponent for Lauzon next time out, as he looks to take a step closer to a title fight after eight years in the UFC.

Dutch kickboxer and UFC heavyweight Alistair Overeem got crushed by Ben Rothwell last night, and it wasn’t pretty. “Reem” did look sharp early on, but as we’ve seen in past fights, it only takes one clean shot. I’d like to be able to place the blame on the division he fights in, as heavyweight is extremely dangerous for obvious reasons, but this happened to Overeem at light-heavyweight too. All due respect to “Big”, he did a great job as the underdog, but anyone title-worthy will beat him.

Perhaps a move to 205 pounds is the best thing for “The Reem” right now, as this will probably keep happening at heavyweight. That’s three knockout losses in his last four fights, and after all the changes he has made over at Jackson’s MMA too. At this stage in Overeem’s long career, it’s time for a choice; retire or drop in weight, because getting bashed around in the heavyweight division won’t do him any good (if he still has a job, that is)

Props go to John Moraga for his come-from-behind submission win over Justin Scoggins, “Raging” Al Iaquinta for his boxing lesson against Rodrigo Damm, Chris Beal for his gutsy win over Tateki Matsuda, and also to Matt Mitrione for his decimation of Derrick Lewis.