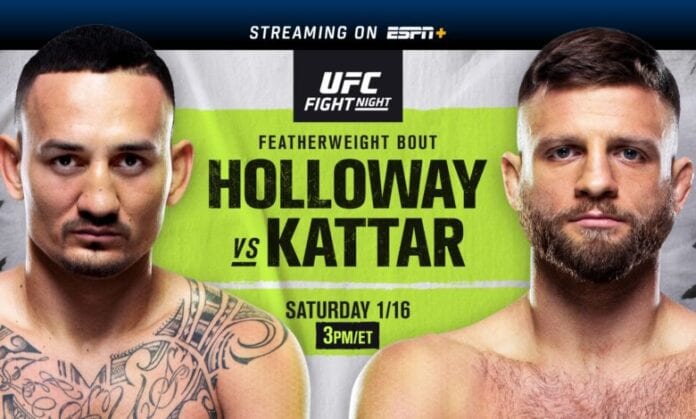 Former featherweight king Max Holloway takes his first non-title bout since 2016 in the UFC Fight Island 7 main event in Abu Dhabi on Saturday night. He’ll square off against Calvin Kattar who has established himself as a player in the 145lb division with his heavy hands which have carried him to four wins in his last five fights.

Join LowKickMMA as we make our picks for the UFC Fight Island 7 main event as well as several other bouts on the card. If your backing our fight night picks head to hajperbetting.com for the best UFC odds.

In the UFC Fight Island 7 main event, we just have to back Max Holloway. He has been at elite-level for so long and in our opinion, he should still be the featherweight champion, with only bad judging preventing him from regaining the 145lb belt at UFC 251.

‘Blessed’ has the height, reach, and experience heading into this one. The oddsmakers have him the favorite at -160. Kattar is a talented boxer with a great chin which should make for a good fight. However, the +130 underdog is a little out of his depth in this one. He’ll hang tough and maybe even see the final bell but we expect Holloway to clearly win in Abu Dhabi tomorrow night.

Former welterweight interim champion Carlos Condit looked great for the first time in a long time when he fought Court McGee last time out. ‘The Natural Born Killer’ snapped a five-fight losing streak against a tough, game opponent. He faces another in Matt Brown but is considered the favorite at odds of -170.

Brown is a talented fighter but in our minds, he is rightfully the +140 underdog. ‘The Immortal’ will charge forward as he always does but that will likely be his downfall against Condit who we expect to catch him coming in and close the show with strikes. If you pick Condit to win by finishing Brown your odds increase to  +163.

On paper, this fight looks to be a mismatch. Santiago Ponzinibbio is one of the best welterweights on the planet, while Li Jingliang has struggled every time he stepped up his level of competition. The oddsmakers seem to follow that narrative and have priced Ponzinibbio accordingly – he’s the -333 favorite. Jingliang is priced at +250.

However, this fight is more intriguing than it appears on paper. Ponzinibbio is coming off a long injury-induced layoff. At 34 years old it will be interesting to see what version of the Argentine fighter comes back. If he’s at his best Ponzinibbio will make easy work of his opponent. If not, it could be a long night. Either way, we’ll be adding Ponzinibbio to our bet. If you want a bit of extra value in betting on Ponzinibbio you can get him at odds of +110 to finish the fight.

Another fight that doesn’t really make sense on paper. Joaquin Buckley established himself as one to watch in 2020 with three UFC fights and two big wins which included LowKickMMA’s KO of the year. After such an epic year it was a surprise to see him matched against Alessio Di Chirico who is currently riding a three-fight losing skid. The bookmakers again agree with us and have priced the fight accordingly. Buckley is the heavy -275 favorite over +225 underdog Di Chirico.

From the UFC’s perspective, this fight seems to be driven by a desire to see how Buckley deals with a guy that is not likely to succumb to his power. The Italian has never been knocked out and despite losing his past three fights has been uber-competitive in them. If the KO doesn’t come early it could be a tough night for Buckley but we think he will find the KO and will be backing him to get the finish at odds of -105.