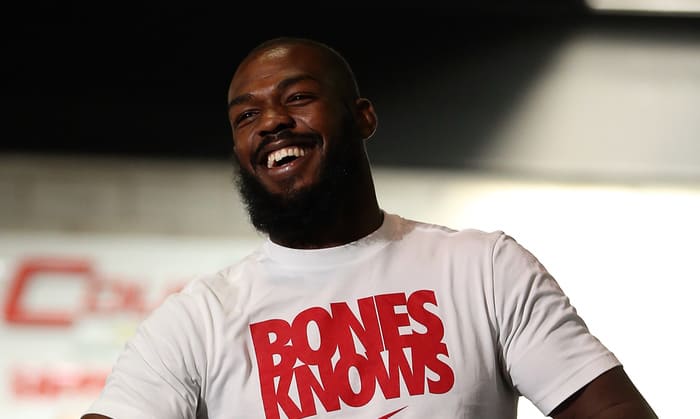 After going on three full years of drug and alcohol-related trouble limiting him to just two total fights, disgraced former light heavyweight champion Jon Jones is currently facing what could be his biggest punishment.

In need of a big star to root for, the majority of the MMA world welcomed Jones back with open arms in his umpteenth comeback fight against Daniel Cormier in the main event of last July’s UFC 214, a fight “Bones” was returning from a yearlong suspension for testing positive for two banned substances prior to his previously scheduled rematch with Cormier at UFC 200 in July 2016.

Jones said all the right things, behaved himself for the most part, and then, most importantly, he beat his most accomplished and heated rival with a third-round head kick of epic proportions. UFC 214 was one of the UFC’s few scarce box office successes in terms of pay-per-view throughout 2017, but the MMA world was then somehow shocked and not surprised at all when Jones failed an in-competition test for anabolic steroid Turinabol.

Jones’ has since claimed the tainted supplement defense, a go-to response that has actually gotten a few fighters reduced suspensions under USADA’s tenure, but it’s also a kind of fool-me-once type of deal with many fans after Jones’ now-infamous ‘dick pills’ excuse for his UFC 200 failure – an incident for which he received the maximum punishment for a first-time offender under their program. Jones could face up to a four-year suspension, yet somehow, there seem to be some slight cracks opening for the embattled would-be UFC legend to make yet another comeback.

Any possibility of Jones coming back, according to UFC vice president of athlete health and performance Jeff Novitzky on a recent episode of ‘The Joe Rogan Experience’ podcast (via MMA Mania), could rest on the fact that any top athlete who was knowingly tested probably would not intentionally use Turinabol as a means of getting a leg up on their opponent:

“USADA did another test on Jon after his positive test and he was negative. Who knows where it plays out, but certainly on the surface of things, I have said, with that type of information out there, it wouldn’t indicate intentional use.”

Indeed the timing and selection of performance-enhancing drug are both odd, especially considering that Jones was tested the day before the fight at the weigh-ins and would have known that was coming.

With more supplements turning up with banned substances in them based on the strict USADA guidelines, it could be possible that Jones somehow ingested Turinabol this way, yet it’s also tough to believe any excuse he makes after his list of transgressions has grown so long it’s hard to keep track of.

It should seem to be another ‘wait and see’ type of proposition for Jones and his fans; however, if any UFC competitor can buck the odds and come back for another high-profile fight, it would probably be Jones.

If the UFC welcomes him back or not would be another question, but with so few bankable stars on the roster, they just may.