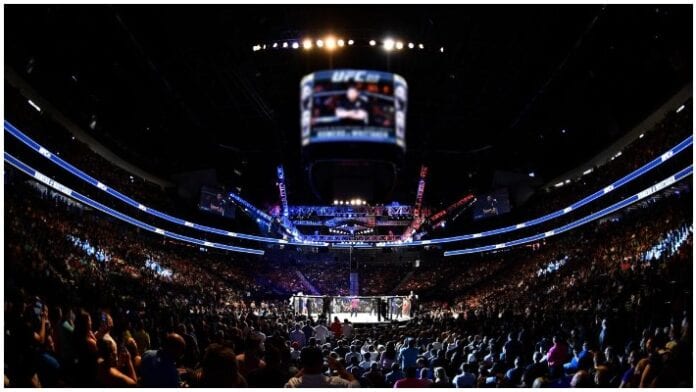 UFC 261 is set to be the first UFC event in the US with fans since February of 2020. To make a statement the UFC has booked a stacked card to suit and it has allegedly already been a success.

According to TSN’s Aaron Bronsteter who spoke to UFC President Dana White, the event has already broken the venue located in Jacksonville, Florida’s gate record on presales alone.

The VyStar Veteran’s Memorial Arena is set to host the first event back with fans but the venue also hosted the first UFC event following the pandemic UFC 249.

The venue is set believed to hold around 15,000 people at full capacity which is the biggest crowd that the UFC has had since the pandemic, larger than the limited capacity venue in Abu Dhabi.

UFC President Dana White was adamant that the UFC would not bring back the fans until they could safely fill an arena and with presales already reportedly selling out, it appears that all is going to plan.

While no COVID safety plan has been detailed by the UFC or the venue, it is likely that some procedures will be in place similar to what is currently in action at UFC events.

It is likely the setup will be reminiscent of what was in place when the UFC welcomed back fans in Abu Dhabi for UFC 257 in January.

UFC 261 is set to be headlined by the Welterweight title fight rematch between champion Kamaru Usman and challenger Jorge Masvidal. The card is also stacked with two other women’s title fights between Weili Zhang and Rose Namajunas, and Valentina Shevchenko and Jessica Andrade.

Tickets for the event are set to go on sale tomorrow March 26, however, it doesn’t look promising if you haven’t already got yourself a presale ticket.

What do you think of the UFC bringing back fans for UFC 261?