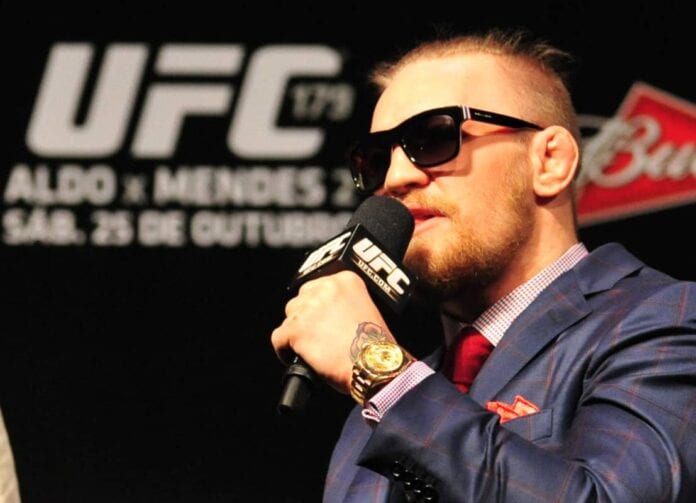 He may have showed up to today’s UFC 202 presser late, but it didn’t take long for UFC featherweight champ Conor McGregor to make an impact.

Shortly after “The Notorious” arrived, he got into a heated war of words with arch rival Nate Diaz as expected, but what followed wasn’t expected in any way. Diaz left his seat with the harsh words, “F— your whole team,” to which McGregor fired back, “F— your whole team. Little crackhead eses.”

Then things got a little crazy with Diaz throwing his trademark middle fingers from the crowd as the champ taunted them with several choice words before he, his brother Nick, and his longtime teammate Jake Shields started throwing bottles at McGregor.

Check it out courtesy of UFC Ireland right here:

Not surprisingly, McGregor did the same, adding cans of Monster Energy Drink in for good measure. Check out his form courtesy of ESPN’s Brett Okamoto:

UFC 202 had been slightly knocked for while no doubt being a big event, also suffering from a bit less hype and media coverage than expected, perhaps due to the dominant nature in which Diaz finished the first fight, or even in the middle of a long string of cards demanding much of fans’ time and money.

But now it potentially has the buzz it needed to truly burst into the stratosphere and break PPV records as White predicted.

Did the insane scene make you want to buy it more?