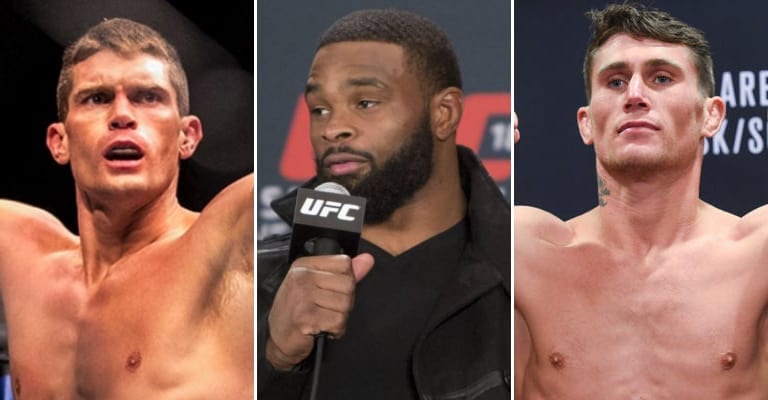 No one knows Stephen “Wonderboy” Thompson as well as UFC welterweight champion Tyron Woodley. The two have collectively gone ten rounds together with the pair drawing at UFC 205 and Woodley winning the rematch at UFC 209.

That being said, Woodley’s assessment of “Wonderboy’s” upcoming fight with Darren Till in the feature bout of May 27’s UFC Liverpool is more informed than anyone else, with the welterweight champ claiming his former foe will defeat Till and keep the rising Liverpudlian star from title contention on a recent Instagram Live appearance via MMA Junkie:

“‘Wonderboy’ the gatekeeper. He’ll do all my light work for me. All the dudes that think they want a shot at the strap, they’ve got to go through him, and ain’t nobody do it yet. I think Thompson (will win) man, to be honest. I know I’ve talked a lot of trash about Thompson, more in light joking. But Thompson is a very difficult puzzle to figure out. And it took me a lot of time, a lot of money, a lot of training partners to figure him out.

“I just don’t think Till has what it takes to take him out. With that said, I’ve got to go with ‘Wonderboy,’ even though he’s never said I was going to win a fight. But I’m just going to be a real guy and be honest: I think he’s going to win.”

Till has been a hyped up prospect ever since he finished Donald Cerrone last year. The fight with “Wonderboy” will likely determine the next contender for Woodley’s belt, especially if Till is victorious.

Meanwhile, Woodley hasn’t fought since defending his belt against Demian Maia in July 2017. Thompson rebounded from his loss to Woodley with a win over Jorge Masvidal at UFC 217.

Woodley also gave his thoughts on the rest of the top of the welterweight division, who all have a fight coming up in the near future:

“I think Usman’s probably going to do his thing against Ponzinibbio. Ponzinibbio is tough, though – crazy striker, really big for the weight class, a lot of punches thrown with cruel intent. It’s hard to say (who will win) in that fight.”

“RDA or Queefington? That’s a tough fight to say. RDA, I don’t know why he’s even taking the fight. He could have fought me next. A roll of the dice. I told him I could fight in July, so if he want to fight this fight in between in May and risk getting passed up on his title shot, then that’s his bad.”

Do you agree with Woodley’s assessment of the welterweight division? Will Thompson defeat Till like the champion predicts?