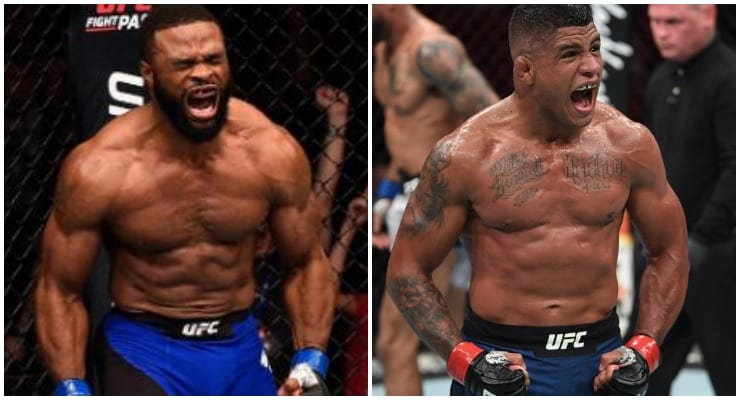 Former welterweight champion Tyron Woodley is set to face Gilbert Burns in the main event on May 23.

Woodley was supposed to fight Leon Edwards to determine the 170lb number one contender, at UFC London in March. Unfortunately, the fight fella apart before the card was indefinitely postponed due to the ongoing global pandemic.

‘The Chosen One’ has since been chasing big fights with the likes of Israel Adesanya and Colby Covington. Now it appears he is set to headline later this month. UFC president Dana White told ESPN in he was in the final stages of making Woodley main event on May 23, he said.

“We’re working on a fight with (Woodley) right now. After these three dates, we’re coming right back. We’re going to do four fights in 14 days. After May 9, the UFC schedule is back on. We’re back on and running. We’re looking at a fight for Woodley. Woodley will probably be the fourth fight. He’ll be the main event.” (Transcribed by MMA Junkie)

Woodley later told Ariel Helwani that he is leaning towards accepting a fight against Burns who’s coming off the biggest win of his career. The Brazilian knocked out BJJ wizard Demian Maia at UFC Brasilia in March. Helwani broke the news on Twitter, he wrote.

“Spoke to Tyron Woodley today. He said he’s leaning towards accepting a main event fight against Gilbert Burns on May 23. Fight isn’t signed yet but it’s looking good at the moment, he said. “I waited as long I could for Colby,” he said. “But he doesn’t want it, so I’m moving on.””

Both fighters took to social media last night to say they had accepted the fight which has been on the table on several different occasions.

“To the 4th time this fight has been offered and for the 4th time I’m saying yes! May 23 main event,” Burns wrote. “Makes two of us,” Woodley responded.

Who wins when Tyron Woodley and Gilbert Burns square off on May 23?