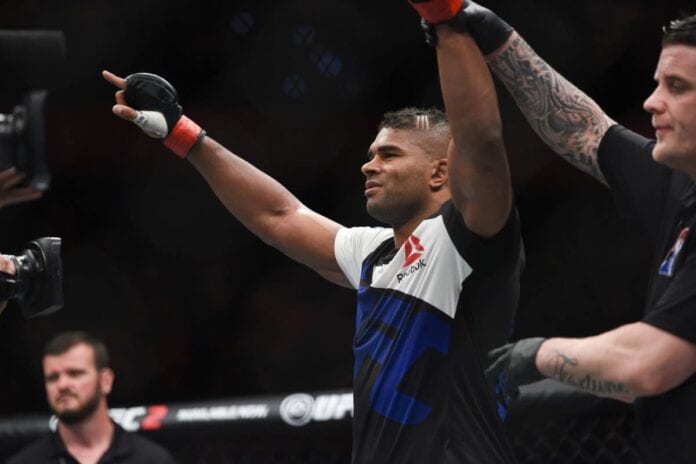 Headlined by a heavyweight slugfest between Alistair Overeem and Andrei Arlovski, UFC Fight Night 87 went down from the Ahoy Rotterdam in Rotterdam, Netherlands this afternoon (May 8, 2016). After a competitive first frame, “The Reem” ended the proceedings in the second to solidify his claim as the division’s number one contender. The co-main event saw another native Dutchman, Stefan Struve, right his ship by blasting Antonio “Bigfoot” Silva into oblivion only 16 seconds into the very first round. Here’s how the Twitter-verse reacted to the heavyweight double-header:

So many steroids, clearly. And I’m here like, I’m the same as I’ve always been.

and boom goes the dynamite. A jump kick to the head, followed by a left fist to the pie hole, followed by punches. Overeem wins via TKO

Sometime I hate this sport, but I still my team. #UFCRotterdam

The Reem’s face was PRICELESS after they pop his toe back into place! #UFCRotterdam @UFC pic.twitter.com/YBqVdXjREq

Now, for the patented humble arrogance of a Reem post-fight interview. #UFCRotterdam

Reem predicts he’ll fight for the belt at MSG on 11/12 and then defend the title in ’17 in Amsterdam. Also, he may have mangled his toe.

Well, that was certainly some heavyweight MMA.

Went to the bathroom during the walkout. Came back , GAME OVER #UFCRotterdam

I fought Stefan Stroove and all I got was this awful haircut..

On the flip side, that might be it for Bigfoot. Just seems to susceptible to the KO these days and has taken a lot of shots. A sad reality.

Not many things better than that winning feeling .. @StefanStruve#UFCRotterdam pic.twitter.com/dw4XAy0MGv

@TommyToeHold it was his haircut

Elbows hurt. I can vouch for this… ???? #UFCRotterdam

He wasn’t moving so yes. Ref isn’t a mindreader. https://t.co/60jRLTpYwH

On that note, I don’t ever need to see Bigfoot fight again. Ever. #UFCRotterdam

Not many things better than that winning feeling .. @StefanStruve#UFCRotterdam pic.twitter.com/dw4XAy0MGv

.@Jon_Anik holding the mic up to Struve above his head like he’s doing a statue of liberty impression. #HeTall #UFCRotterdam