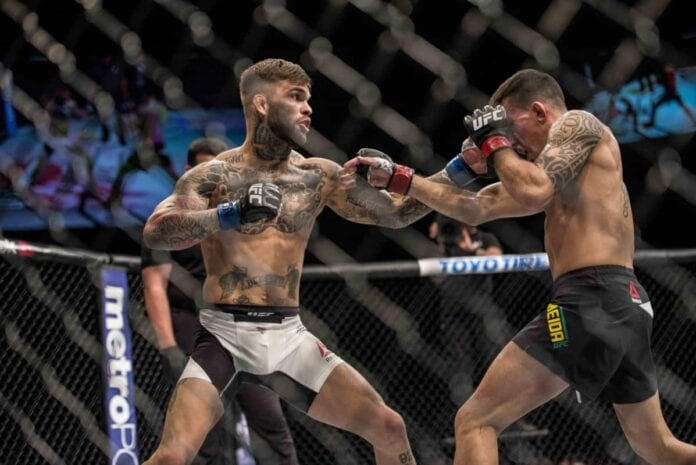 The mixed martial arts world was treated to an excellent night of scraps tonight (May 29, 2016), as UFC Fight Night 88 popped off from the Mandalay Bay Events Center in Las Vegas, Nevada. The evening was highlighted by the explosive brawl between Brazilian Thomas Almeida and Cody “No Love” Garbrandt.

The fans got exactly what they came to see, as the two undefeated bantamweight prospects turned in the slugfest we were all hoping for. It just didn’t last very long. The Team Alpha Male export proved too much for Almeida, shutting off the lights with a right hand to the jaw in the very first round.

The co-main event also saw a tense standup battle, as former bantamweight champion Renan Barao made his long-awaited move up the scale to 145 pounds. There to greet him was longtime slugger Jeremy Stephens.

The greeting turned out to be a rude one. “Lil Heathen” rocked Barao several times during their back-and-forth clash, earning a unanimous nod from the judges and putting the rest of the featherweight division on notice in the process.

See how the MMA Twittersphere reacted to these two excellent bouts:

Good thing we probably don’t need those three stooges tonight. Now that I say that we’re gonna get a wacky decision.

Looking forward to this fight. Keeping a close eye on this one.. @ufc #UFCVegas

People who have seen Almeida fight before are just sitting here totally unaffected by his getting hit.

Hang on… Garbrandt has a gun in the back of his shorts. I’m no expert on the unified rules but…

Cody Garbrandt GOT HIM. Down goes Thomas Almeida in the first!#UFCVegas https://t.co/Qiu0RnA8px

Smoked him .. That loud ! #UFCVegas

What a performance by Garbrandt!!! The Almeida Hype Train is off the rails in a flaming heap. That was a one-sided beating. #UFCVegas

For the record, Garbrandt said on Monday’s #themmahour (and other places), he would KO Almeida in the first. Way to back it up, No Love.

Man I killed the bookies tonight! Give me my money! #Vickspicks

If you’re gonna try to merc Thomas Almeida, that’s how you do it. Smart stuff by Garbrandt to force the issue immediately. Beauty right hook

Im down to fight either one of these guy. I would love to fight one of em. Who do y’all think I should fight next?

Calls out Cruz, media, and does it for America. Solid post-fight interview for Garbrandt. #UFCVegas

For real. Garbrandt has faster hands than DJ and that’s no exaggeration. He’s probably the fastest puncher in MMA. https://t.co/Tlah0PnY9b

Barao thinking about that push during weigh-ins backstage like #UFCVegas pic.twitter.com/PLUv1PaX1U

Baracula wins the first. Looks small in there for 145lbs., but way faster than Stephens. #UFCVegas

Barão looking like he regrets the last 13 years of his life. #UFCVegas

Barao has the worst poker face once he gets hit and hurt. Great chin but when he eats a big strike, he freaks out and goes off the rails bad

Stephens swings like he has hammers in his hands.

Barao looks great at 145. I think it was a good career move. Heathen is a monster. Hard to score that one. #UFCVegas

Barao isn’t a broken fighter but he is a defeated fighter tonight. Great fight from both men! Stephens brought it tonight. #UFCVegas

The card hasn’t been finish heavy, but this has been great matchmaking between some really tough fighters.