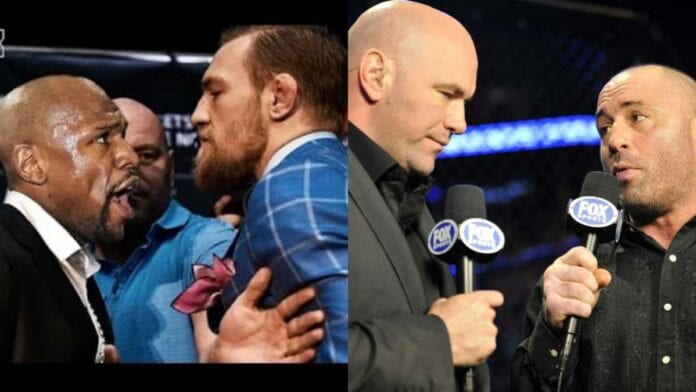 It’s been yet another weird news week for fans of mixed martial arts, and once again UFC featherweight champion Conor McGregor is at the centre of it all. His standoff with the UFC got escalated another notch today, as rumors ran wild of a planned ‘billion dollar’ boxing match against Floyd Mayweather.

The two polarizing pugilists do have a history, with plenty of trash talk going back-and-forth, and the now retired ‘Money’ Mayweather has gone on record many times claiming he doesn’t know who McGregor is. Aside from the obvious fact ‘The Notorious’ is signed to an iron-clad contract with the UFC, a fight against one of the greatest boxers of this era is unlikely, at best, for a number of reasons.

For starters, for McGregor to step in to the boxing ring would probably take away his biggest advantage, the mixed elements of his martial arts training. That said, a billion dollar fight would probably mean a swift retirement fund for McGregor, so who wouldn’t take that fight?

So obviously social media went in to a state of frenzy following the rumors of the fight that was allegedly ‘close to agreement.’ A number of high-profile names in the sport have given their take on the situation, but there are plenty of hilarious reactions too.

Check out the Twitter reaction to the rumo-rs of Conor McGregor vs. Floyd Mayweather:

Floyd Mayweather will race Usain Bolt in a winner take all $1billion dollar 100 meter dash at the Roman Coliseum in the summer, Im told

The likelihood of Mayweather-McGregor happening is right there with the Kardashians going underground. https://t.co/4ZYn6C6v3P

Rumours that Floyd Mayweather vs. Conor McGregor is in the works. We cross live to the negotiations: pic.twitter.com/G3r89O6sjW

A. I don’t buy it. B. How can Conor McGregor think about boxing Floyd Mayweather when he couldn’t outbox Nate Diaz? Doesn’t make sense.

No, Conor McGregor is not going to box Floyd Mayweather https://t.co/zzcPvOK1lr via @MMAjunkie

@TheNotoriousMMA vs. @NateDiaz209 or @FloydMayweather DOESN’T matter the end result will be the same. #MMA#UFCpic.twitter.com/QK93jq2Uhs

Absolutely no truth to this McGregor-Mayweather story. I can’t believe people are actually falling for this nonsense. … (Cont’d)

A) McGregor has a UFC contract. He can’t just go fight Mayweather. And b) do you really think he would agree to those pay terms? C’mon now.