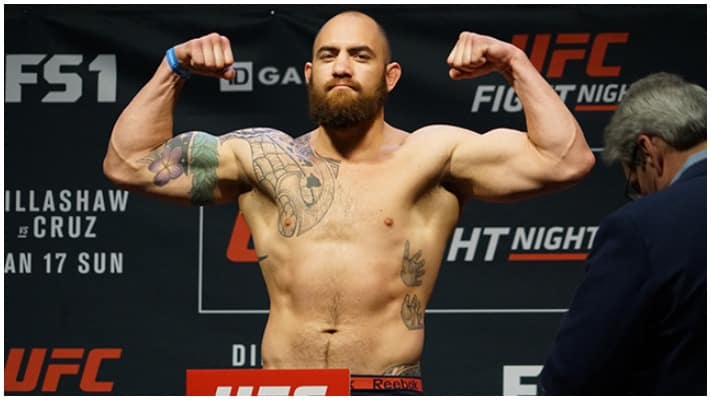 Travis Browne has let rip at the fighters currently campaigning for better pay.

The former UFC heavyweight contender has left his fight career behind him but still clearly has strong views on what’s going on in MMA today.

‘Hapa’ co-hosts a podcast called Tough Business with entrepreneur John Fosco. Dana White was a guest on the most recent episode. Ronda Rousey’s husband had nothing but good things to say about his former boss and his UFC paycheques.

“You guys always paid me what you said you were gonna pay me, and most of the time, it was actually more,” Browne said. “So, all these people that are complaining about it, that are just talking sh*t about it, at the end of the day, I’m the one that signed that f*cking contract. And then I’m gonna turn around and b*tch about it? Or i’mma b*tch about it to a f*cking reporter or something like that?

“That doesn’t make sense to me as a man. I signed a contract. If I wanted to get paid more, and you guys have always been upfront about it. ‘Hey, if you’re a free agent, go find a better deal.’ I’ve always felt like I was part of the UFC.

“When one of my contracts was up, we had a bigger offer, but I was, like, ‘Listen, the best fighters are here in the UFC, and I’m not trying to be a B-Level fighter. I’m trying to compete against the best.’

“You guys have always treated me right. The pay has been there, and again, it’s always been at least what the contract was, and most of the time it was more. So these people that are complaining, people in the media that don’t f—ng hear that they hear the little bitch that’s crying and complaining. Because you get these, like, entitled people. Or I don’t know where the f—k it comes from.

Browne hasn’t fought since losing to Aleksei Oleinik via second-round submission at UFC 213 in 2017. The 39-year-old ended his UFC run with four straight defeats.

Do you agree with Travis Browne? Do the UFC pay their fighters fairly?