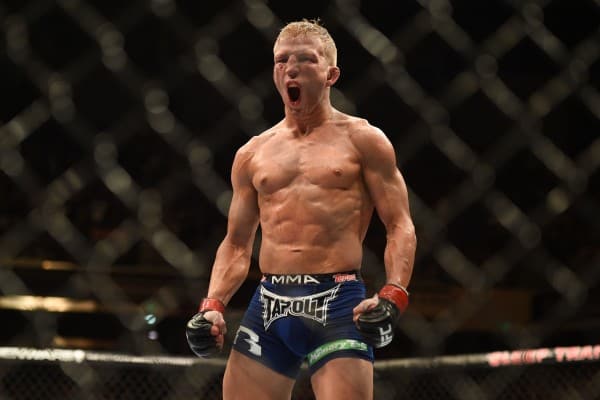 It’s been a turbulent couple of weeks for UFC bantamweight champion TJ Dillashaw after his controversial decision to leave his longtime friends at Team Alpha Male for Colorado’s Elevation Fight Team to train for his upcoming title bout with former champion Dominick Cruz.

The beef arose out of Dillashaw being in between his good friend and TAM leader Urijah Faber and his striking coach Duane “Bang” Ludwig, who had a well-documented rift with “The California Kid” that resulted in him leaving to set up his own gym in Colorado.

Some would state that Dillashaw when the timing couldn’t have been any worse, as it confirmed to many interim featherweight champion Conor McGregor’s suggestion that Dillashaw was a “snake in the grass.”

Whether that’s a fair assessment of the sticky situation or not, “The Viper” appeared on today’s episode of The MMA Hour with Ariel Helwani to give his side of the story, and not surprisingly, he’s feeling like he’s not in the wrong, having been put into a compromising situation by the ongoing drama between Faber and Ludwig:

“I kind of feel he almost put me in this position. I want to talk about the position I’ve been put in. I’ve been stuck in between Urijah and Duane Ludwig for this past camp going back and forth in my training camp and these guys are bickering at each other. That makes it tough on me. He brought a coach into Team Alpha Male that for the last two years of my career I’ve learned to believe in and trust with my career. Then a bunch of drama happens and I’m having to choose where I train. Am I not supposed to train with a coach that I put all my faith in and helped me win a world title? You can go back to the last two years and see how my kickboxing has developed and I owe all of that to Duane. So it’s a very tough situation to be put in.”

It’s understandable as to why Dillashaw wouldn’t want to be in between the two sides any longer, and it’s also understandable as to why he’d want to go to a state-of-the-art training facility that pays him to be there. But Dillashaw said it comes with a price, and that price includes not being able to go back to see his former teammates and friends at TAM after Faber banned him:

“I am not allowed to show my face at Alpha Male, which is kind of crazy to me. It’s super tough. But I know I made the right decision and I got a big fight coming up and that’s the most important thing. I made a decision to train somewhere else and I didn’t think it was going to blow up and be as ridiculous as it is now. It’s tough because I’m best friends with these guys.”

All of these dynamics have lead many to believe Dillashaw vs. Faber is a foregone conclusion after “The Viper” finally defends his belt against Cruz in the main event of January’s UFC Fight Night 81, a bout that both sides had vehemently denied that would participate in prior to all of this erupting.

Now, however, Dillashaw said he believes Faber is looking for a big fight to close his career, and that he would “most likely” agree to fight the man who got him his start in MMA, perhaps throwing a subtle barb at the aging “California Kid”:

“I didn’t think I would be until Urijah started saying the stuff he did. He’s the one saying that he’s more than willing to fight me. I thought we were a lot closer friends than that. I put my heart and soul into this team and I thought we were a lot closer. He’s obviously looking for a big fight in his career. I don’t want to have to do it, but I’ll be the last statement on his career if that needs to be, but it’s not the way I really want to do it. Probably most likely (I’ll say yes to the fight). I don’t want to have to fight Urijah, it’s not something I want to have to do, I love the guy. The ball is in his court, I am the champion but the ball is in his court. I’m leaving it that way and what he wants to do. I love all these guys and they are like family to me, not teammates.”

Lastly, Dillashaw closed out the interview by clarifying Faber’s recent comments that he wasn’t welcome back to TAM because he hurt training partners in sparring. It wasn’t something that Dillashaw necessarily denied doing, but he does believe it’s been blown out of proportion:

“I definitely have something I have to work on, it’s just my competitive edge in practice. I definitely don’t do it maliciously; it’s something that I’m just aggressive, like when I get into sparring, spar a little bit, a little bit aggressive. I would say that it got blown out of the water; it’s definitely a fault I have. But I think it was harped on a little bit too much. I’m aggressive; I feel like that’s a formula for a world title though, as well. But I’ve had to control it and I continue to try to control it, and use controlled aggression when I need it.”