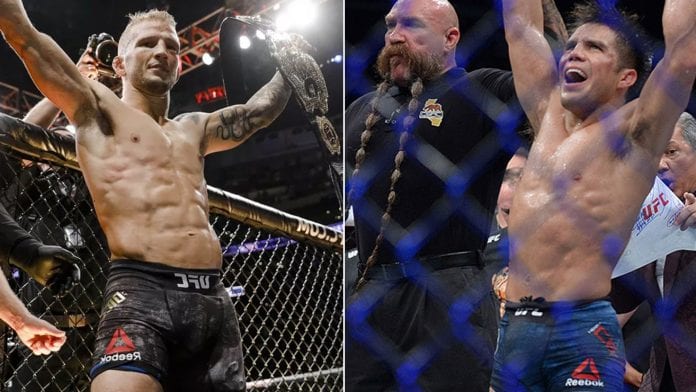 It didn’t take long for UFC flyweight champion Henry Cejudo to campaign for his next fight inside of the Octagon under the UFC banner after beating Demetrious Johnson to capture the title by split decision in the co-main event of Saturday’s (August, 4, 2018) UFC 227 pay-per-view event at the Staples Center in Los Angeles, California.

Following the fight, Cejudo called for a fight against UFC bantamweight champion TJ Dillashaw, who scored a first round KO victory over Cody Garbrandt in the main event, despite an obvious trilogy bout with Johnson that makes the most sense due to the fact that Johnson was on top of the division for such a long period of time and because Cejudo won by split decision along with Johnson having several injuries.

Cejudo made it clear that he is open to the third fight with Johnson as he lost by first round TKO back at the UFC 197 event in August of 2016 but noted that he is more than willing to jump back up to bantamweight to challenge Dillashaw for his championship.

Of course, once taking the stage for the UFC 227 pay-per-view post-fight press conference, one of the biggest questions was if Dillashaw would be interested in taking on Cejudo at bantamweight but the only problem with that is the fact that he sounded a little less excited about the prospect.

“I don’t really think the guy would deserve it,” Dillashaw said.

It will be interesting to see if the UFC books these two fighters against each other as Cejudo will likely wait for Johnson to get healthy and fight for a third time while there are several top contenders for Dillashaw to fight next, but time will tell how this all plays out.