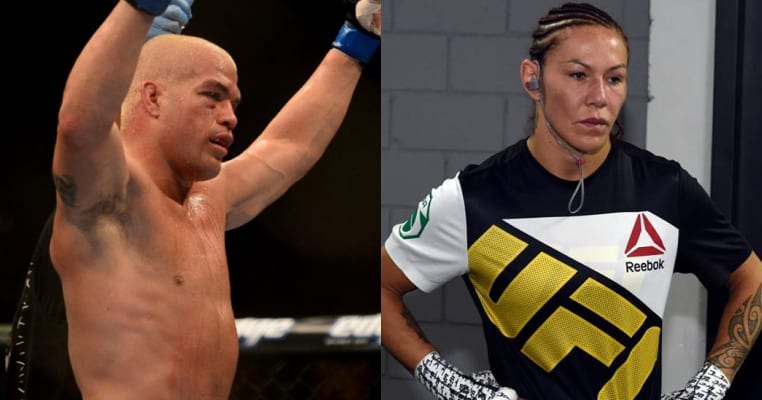 Last month it was reported that Invicta FC featherweight champion Cris Cyborg Justino had been flagged by USADA (United States Anti-Doping Agency) for a potential anti-doping violation. Prior to that, UFC President Dana White said that the promotion had offered her two fights for the inaugural UFC 145-pound title, but she denied both of them, saying that she wouldn’t be able to make the weight in time.

Justino has competed twice in the UFC thus far, finishing Leslie Smith and Lina Lansberg in 140-pound catchweight bouts. Typically competing at featherweight, it was surprising to hear that the Brazilian slugger turned down multiple title fights in her respective division, but perhaps the potential violation had something to do with that.

Either way, former UFC light heavyweight champion Tito Ortiz, who used to manage Cyborg, recently told MMAJunkie that he advised her to take the title fight:

As far as Justino’s situation with USADA goes, Ortiz was reluctant to comment on the manner:

“The situation she’s going through right now, from what I’ve heard through her attorney and what I’ve heard from her, it was strictly from her doctor,” Ortiz said. “So I have no input on that at all. I don’t know. I’m not going to make any statements at all about it, because I know zero about it.”

“She has not sought career advice from him in some time as he no longer plays a part in her management, he said.”

Ortiz will return to action next month (Jan. 21, 2017) in the main event of Bellator 170 as he takes on former UFC title challenge Chael Sonnen.