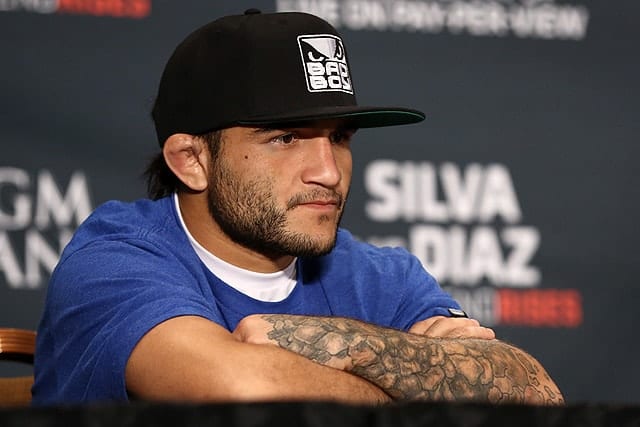 John Lineker and Francisco Rivera just threw down in an instant classic one-round affair on the preliminary card of tonight’s (Sat., September 5, 2015) UFC 191 from the MGM Grand Garden Arena in Las Vegas, Nevada.

After failing to make the flyweight limit of 126 pounds on several occasions, ‘Hands of Stone’ was forced to move up to bantamweight by UFC president Dana White, and he was immediately thrown into the fire against Top 15-ranked challenger Rivera.

But the Brazilian capitalized in a big way, rocking Rivera with some huge first round shots, prompting ‘Cisco’ to throw caution to the wind and throw all-out in one of the most exciting 60 seconds of pure violence we’ve seen in quite awhile.

After taking a huge left hook and several more pounches on the chin, Lineker locked on a tight guillotine choke to gain the tap, earning an impressive 135-pound debut. Watch the crazy exchange courtesy of UFC on FOX right here:

Stop everything you’re doing right now. This may be the CRAZIEST :60 seconds of fighting you’ll ever see. #UFC191 http://t.co/j28k6wUOzw