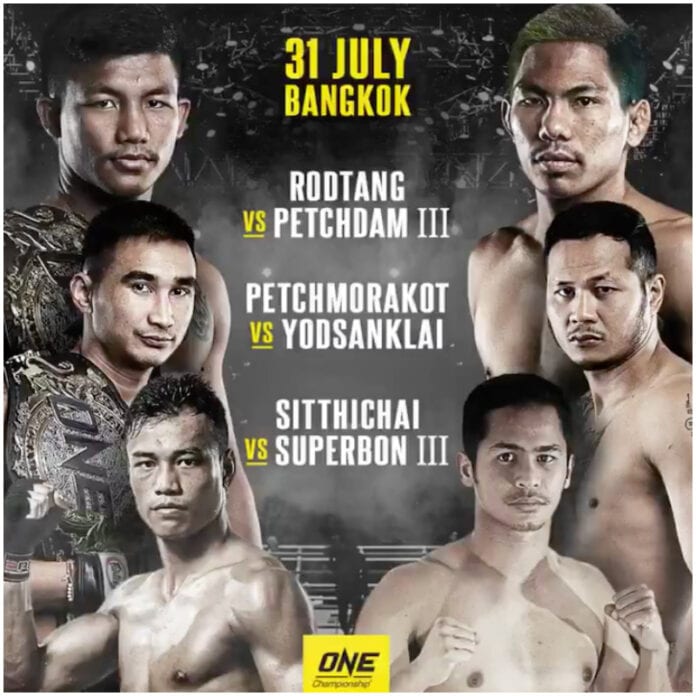 After a five-month absence, ONE Championship will return on Friday, July 31, when ONE: No Surrender goes down in Bangkok, Thailand.

The full card is not yet out but ONE has announced that spearheading the event will be a trio of all-Thai Super Series matchups. Thailand’s Covid-19 border restrictions has meant that the card will only feature fighters currently based in Thailand. Thankfully, Thailand is home to the world’s best Muay Thai fighters, which means the card will have no shortage of talent. If ONE wanted to come back with a bang, they have picked the right country to do it in.

Leading the charge is the main event clash between ONE Flyweight Muay Thai Champion Rodtang Jitmuangnon and Petchdam Petchyindee Academy, who is a former ONE Flyweight Kickboxing Champion. The pair have shared the ring twice before with Petchdam earning a unanimous decision victory in 2017 before Rodtang reversed the result a year later⁠— with both fights taking place before either fighter signed with ONE.

The co-main event is another Super Series title fight. Reigning ONE Featherweight Muay Thai Champion Petchmorakot Petchyindee Academy will take on a real veteran of the sport in Yodsanklai IWE Fairtex. The 34-year-old Yodsanklai has won multiple championships throughout his years competing, and before 2019, he had gone seven years without defeat.

The third-bout announced sees recent ONE arrivals Superbon Banchamek and Sitthichai Sitsongpeenong squaring off in a featherweight kickboxing bout. These two fighters are both in their prime and at the top of their weight class. The pair have fought twice before with Sitthichaiwinning winning the first encounter in 2016 via second-round KO and Superbon taking the second eight months later via unanimous decision.

ONE will be announcing more bouts shortly. However, if your a fan of high-level striking, the three aforementioned fights make ONE: No Surrender a must-see card.

What do you think of the lineup so far?