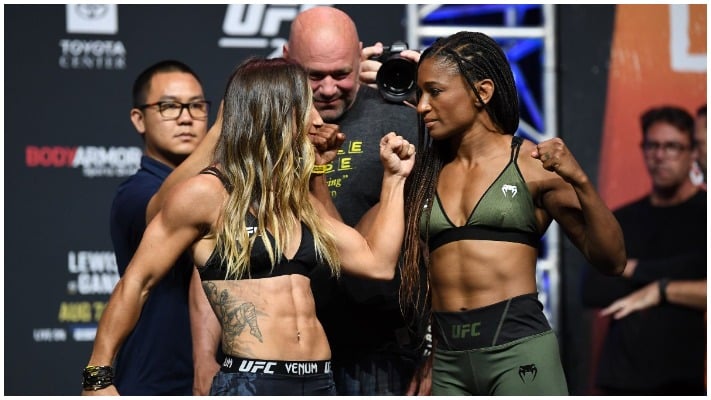 Up next at UFC 265, we have a strawweight rematch between Tecia Torres and Angela Hill.

Round 1: Tecia Torres is landing early and often. The #10 ranked strawweight fighter is frequently bursting forward with eye-catching combos. Angela Hill catches a kick and takes this fight to the mat. Torres has to work really hard to get back to her feet but Hill maintains the clinch position against the fence. Eventually, they break and Torres is back to doing good work with her hands. There’s just too much offence from Torres right now, Hill is struggling to get out of the way. Torres picks her opponent up and dumps her to the floor. We are quickly back to the feet. Torres continues to press forward. Hill is able to land the odd counter but nothing stops the forward momentum of ‘The Tiny Tornado’. The two fighters exchange body kicks before round one comes to a close.

Round 2: Torres hits a body kick followed by a head kick at the start of round two. Hill is plodding forward and seems to be trying to pin Torres against the fence. Hill eats a low kick but returns with an overhand right. Torres catches her opponent coming in with a beautiful check hook. Hill catches a kick and uses it to take the back of her opponent. Torres runs to the fence to prevent this takedown. Hill lands a knee in the clinch. Torres hits an elbow as they break. Hill clinches up but Torres just punches her way out of it. ‘Overkill’ tries a flying knee but eats a shot as she’s in midair. Both women are throwing wild but Torres consistently gets the better of the exchanges. Torres spins for a kick and slips to her back. Hill ends the round on top but has next to no time to score any damage.

Round 3: Both fighters come out with a kick heavy approach in the third round. Torres lands a overhand. Hill tries to clinch up against the fence but Torres defends well and gets back to punching range. Torres dips for a takedown but is easily shrugged off. She lands a nice shot as they break. It’s getting a bit wild in the middle of this final round. Hill appears to be building some momentum. Torres attempts to stop that with a blitz. Hill continues to press forward, this is undoubtedly her best round of the fight. Torres just never allows her opponent to build-up ahead of steam. Lots of output even after almost three full rounds of a high-paced fight. Torres secures a late takedown and lands a few short shots before Hill stands back up. Torres drags Hill back to the mat as the horn sounds to end the