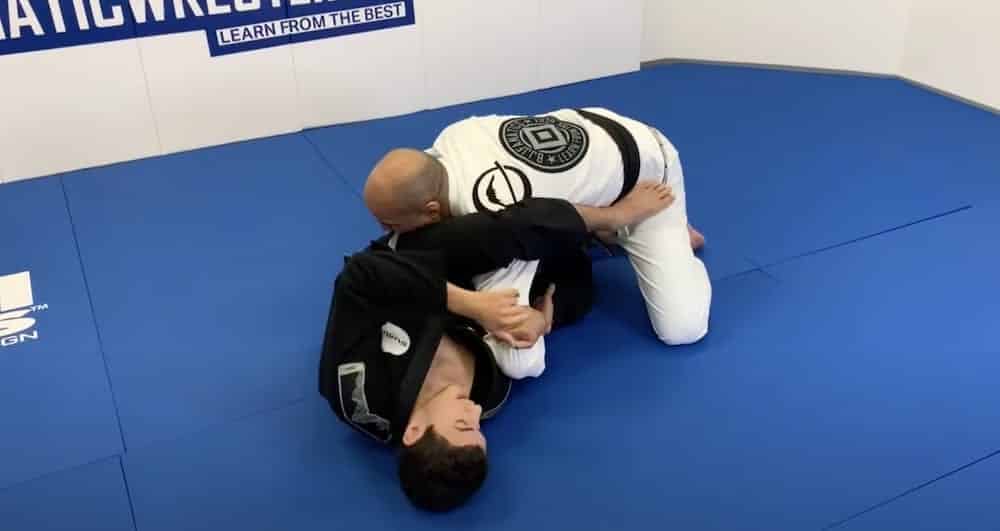 Everyone in Jiu Jitsu no matter what their belt is can come up with a move that works. We are all innovators and are constantly coming up with effective techniques nobody has seen or done before.

That’s what brings us to this post about the submission, the tarikoplata. We are going to break down everything about the tarikoplata from the inventor, and how it works. Also the various ways you can set up and hit this effective technique.

Who came up with the Tarikoplata?

The inventor of the tarikoplata is the person it is named after, Norwegian grappler Tarik Hopstock. Tarik is a Norwegian brown belt under Eduardo Rios.

Hopstock was getting recognition for using this move a few years ago in numerous European competitions. But he actually began tinkering with this move when he was still competing as a juvenile.

In an interview with BJJ Heroes, Tarik explained how he sort of fell into doing the move:

“It started with how I struggled to pull people’s arms out from the top kimura position. This was around 2014 and I was trying to solve the problem with some of my teammates. After some trial and error, I ended up passing my leg over my opponent’s hip. Later I started to recognize the position for the bottom and successfully applied it to my game.

Little did Hopstock know, the move he was hitting in competitions would give him recognition in the BJJ community. Now the tarikoplata is being innovated by grapplers all over the world.

How does the Tarikoplata work?

The tarikoplata blends together a kimura, an omoplata, and also a sweep if you’re on bottom. When Tarik would go for kimura grips from the knee shield, his opponents would recognize this and block.

So what he would do to counter this is bypass their head with his foot and bring it over their shoulder. Once he gets on top, he has his opponent’s arm isolated and controlled with his legs and arm.

For the finish, he pushes the arm behind the back. The pressure feels like an omoplata and kimura all in one. Making it a very effective and tight submission.

How to do the Tarikoplata

The original tarikoplata starts from the bottom in a knee shield or a z guard. When you start in this position, always remember to have good frames to stop your opponent from giving pressure.

To get into position, you need to first complete two steps. The first is you need to push the opponent’s head away and put your knee in front of their face. This blocks them from coming forward and preventing the submission attempt.

Your second step is to underhook your opponent’s arm with your other hand. Grabbing their elbow and bringing it to your chest.

Next you need to get your leg over your opponent’s shoulder by circling your foot over their head and shoulder. Placing your foot on their hip.

From here, you’ll get a kimura grip and the natural reaction of your opponent is to tuck their arm in. This is the reaction you want to go into the tarikoplata.

Go up on your shoulder and bring your hip over your opponent’s shoulder. This allows you to move your bottom leg out and push it through.

With your free hand, you’re going to grab your opponent’s gi pants. Your far leg stays over your opponent’s head and as you pull them over, your other foot steps on the floor.

When your opponent falls to their back, let go of their pants, put your hand on the mat, and sit-up. When you sit-up, you sit on top of your opponent, sit your foot under their arm.

Your other foot steps up and enables you to torque their arm. For the finish, your knee goes down and your elbow rotates to the roof for your opponent to tap.

If you have an opponent attempting an under/over pass it puts your right into position for the tarikoplata. Take your leg that your opponent is under hooking and throw it right over their head and on their hip.

From there, the sequence is the same as the original set up.

Sometimes when you attempt the sweep, your opponent postures up. This will block the initial sweep, but you have a plan B from here.

Once they posture up you’re going to use their energy to take them backwards. Similar to the back roll sweep you would do when an opponent defends your omoplata attempt.

When they posture up and use that energy to back roll and sweep them over. You end up right in the original finishing position.

(See the last 2 minutes of the first video for how to do these last two techniques.)

Everybody has been in the armbar position on top when your opponent defends. From here, you have the option of going for the tarikoplata.

From the armbar, your inside arm loops under your opponent’s arm and you grab your thigh. Then you grab their wrist, pull it down, and bring your leg over their wrist.

With their arm controlled, take your free foot and put it on their hip to rotate yourself around their body. Then just like the original technique, you use your base hand and foot to sit-up on your opponent.

Rotate your body towards your opponent’s head for the finish.

A tarikoplata is also possible from an opponent’s stack pass attempt. Start by cross grabbing your opponent’s collar and push on their neck.

This gives your space to get your underhook on their elbow. From there the setup is exactly the same as if you were doing the original tarikoplata.

Tarikoplata entry from side control

From side control, if you grab a kimura and go to the north/south position. It opens up when they defend by grabbing their belt or holding their hands together.

Hug their arm with one hand and hold your opponent’s leg down by grabbing their pants. Once they’re controlled, loop your leg over their body and grab your thigh.

To finish, put your opponent on their back and rotate your body towards their head for the tap.

A tarikoplata is even possible in No-Gi. Here is how it works without Gi grips.

This is exactly how you would do the tarikoplata finish the previous technique. You have a kimura in the north/south position and defend it by locking their arms together.

Base on your opponent’s leg, loop your leg over their body, and trap their arm with your leg. You can either do the original tarikoplata finish or you can go to your back.

If you go to your back the finish is similar to an omoplata. Push your hips forward as their elbow goes down to put on the pressure.

Tips for doing the Tarikoplata

The tarikoplata is a great technique, but one missed detail can make the technique fail. Here are important tips for doing the tarikoplata.