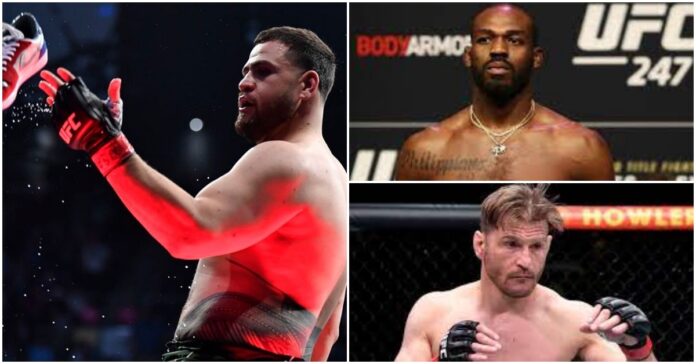 Coming off an impressive win over Derrick Lewis, adding to his current 5 fight knockout streak, Western Sydney’s own Tai Tuivasa is ready for all challenges coming his way. In a recent interview, he breaks down a matchup between two potential future opponents, as rumors circulate around a fight between former light-heavyweight king Jon Jones and former heavyweight champion Stipe Miocic.

In a recent interview, ‘Bam Bam’ discussed the current landscape in the heavyweight division, but he focused his attention on two potential opponents, Jon Jones, and Stipe Miocic.

When asked about his opinion on both Jones and Miocic, Tuivasa did not shy away from telling exactly how he feels about both men as people and competitors. “Bam Bam” stated that “Jon Jones is probably the best MMA fighter of all time… he’s still a d*ckhead.”

On the topic of potential HW GOAT Stipe Miocic, Tuivasa noted that “He’s [Miocic] the best heavyweight champion.” The respect for the former champ is there for Tuivasa but in his personal opinion he believes that father time is calling for Miocic, as he also remarked that “I think Stipe’s just getting a bit old.”

Tuivasa went on to say that “if I ever got the opportunity, I would fight him [Jones]… maybe I win, maybe I lose, but at least I can say I got a crack.”

Tai Tuivasa’s current 5-fight KO streak over Stefan Struve, Harry Hunsucker, Greg Hardy, Augusto Sakai, and Derrick Lewis has set him up for the biggest challenge he will face in his professional career. With a dominant and impressive win over Ciryl Gane in September, he could be catapulted to the top of the division, granting him the opportunity to challenge for the Heavyweight belt next.

If Tai Tuivasa beats Gane will he get the winner of Stipe Miocic and Jon Jones or will he get a chance to challenge for the heavyweight belt?