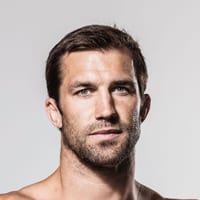 Luke Rockhold comes from an athletically gifted family. His father was a professional basketball player and his brother is a pro surfer.

Rockhold started participating in wrestling in 7th grade and did until he graduated. While wrestling in high school, Luke also started taking Jiu Jitsu classes.

When he graduated, he tried continuing wrestling at a local community college, but decided to train Jiu Jitsu full time.

After training strictly Jiu Jitsu for 5-6 years, Luke decided to take up mixed martial arts. He had a friend that trained at American Kickboxing Academy in San Jose, California.

Coach Javier Mendez saw a lot of potential in Luke and took him under his wing. Grooming him to be a future world champion.

After only a year of MMA training, Luke made his pro MMA debut winning by armbar. Although he would hit a snag in his 2nd fight losing by TKO.

Very early on, Rockhold was able to get on some of the first Strikeforce shows. Since Strikeforce and AKA were both located in San Jose it only made sense they would fight on the card.

Luke would fight his next 9 fights with Strikeforce going undefeated. Starting on the undercard and working his way up to the main event. He would win the middleweight championship in his 7th Strikeforce bout and defend it twice before the company was sold.

Luke was one of the highly touted fighters that came to the UFC when they bought Strikeforce. Rockhold would have a tough first matchup against MMA legend Vitor Belfort in his home country of Brazil.

The match did not go Rockhold’s way as he was stopped by  a spin kick in the first round. Not the intro he wanted to make, but he’d get back to training and get better.

After dropping his first UFC fight, Luke would go on to win his next four fights. Including wins over former light heavyweight champion Lyoto Machida and TUF winner Michael Bisping.

Those 4 wins set Rockhold up to fight then champion Chris Weidman for the title. Weidman was the favorite after beating the great Anderson Silva twice.

Luke controlled the champ with his Jiu Jitsu and was able to stop him with strikes in the 4th round. Winning the middleweight championship.

In his next fight, Luke would defend his title in a rematch against Michael Bisping. Rockhold assumed that he would easily win the rematch, but he was wrong.

Bisping upset the champ with a first round KO to win the world title. In his next fight, Rockhold would bounce back, beating David Branch by TKO.

His next fight would be a #1 contender fight against Yoel Romero, the scariest fighter in the division. Romero would stop Rockhold with a violent KO to win the match.

For a brief time after the loss, Rockhold went into semi-retirement. It wouldn’t last long though as he made his return at light heavyweight a year later.

It would not be a good return for Rockhold as Jan Blachowicz would break his jaw winning by KO.

Where Does Lyoto Machida Go With A Win At UFC Fight...

Luke Rockhold Staying Ready To Fill In At UFC 184 If...

Who Deserves The Next Middleweight Title Shot?