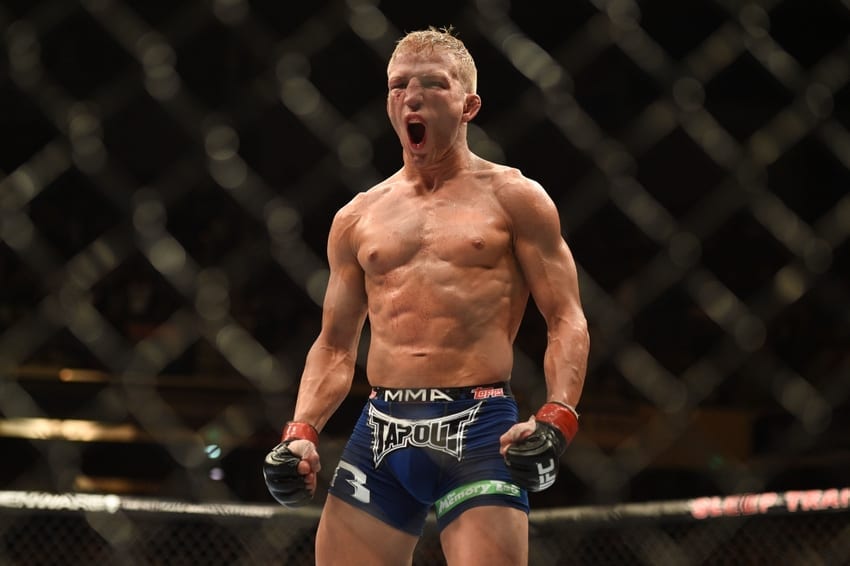 T.J. Dillashaw (14-3) had hopes of fighting Dominick Cruz in a bantamweight title rematch at UFC 207. Instead, Cody Garbrandt received a title opportunity and Dillashaw was booked against John Lineker (29-8).

“Hands of Stone” never got started.

Dillashaw went for a head kick early, but missed. Lineker caught a leg kick and momentarily held onto a head lock. They returned standing and Dillashaw’s headkick was caught. Dillashaw landed an illegal upkick, but the fight wasn’t halted and the Elevation Fight Team member was warned. “Hands of Stone” was taken down quickly. The former bantamweight champion maintained top control.

Lineker got back up and was hit with a step-in right hand. “Hands of Stone” swarmed, but was countered with a right hand. He swung wild, but to no avail. A front kick to the body found the target for Dillashaw as the round concluded.

Dillashaw continued to get the better of Lineker wherever the fight went in the final stanza. Lineker got clipped with countered and got taken down again. The Elevation Fight Team competitor went for a calf crank. Dillashaw went for a flying knee towards the end of the round. Dillashaw raised his hands up as the final horn sounded.

This was a one-sided affair.