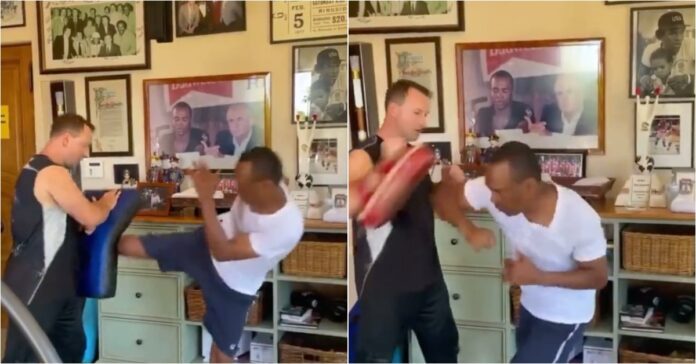 Leonard, a native of Wilmington, North Carolina is recognised as one of the most accomplished boxers of his generation, and of the greatest technicians the squared circle has seen to boot in its antiquity.

Sugar Ray Leonard was part of ‘The Four Kings’ alongside Roberto Duran, Tommy Hearns, and the late, Marvin Hagler

The International Boxing Hall of Fame inductee, Sugar Ray Leonard defeated his fellow ‘kings’ throughout his pomp in the sport, establishing a 36-3-1 professional boxing record upon the culmination of his career back in March 1997.

Posting footage on his social media recently, Leonard shared videos of him drilling kickboxing and striking combinations on Thai pads, including round kicks to the body, front kicks to the midsection, and step-in elbows.

Leonard, who debuted professionally in 1977 following his Olympic gold medal victory back at the summer games in Montreal, Canada the year prior, managed to score five titles across five separate weight classes. Following his loss to Hector Camacho in 1997, Leonard was slated to meet with Tony Menefee the following year, however, firmly confirmed his retirement from the sport citing a lack of motivation to compete, Sugar Ray Leonard withdrew from the bout.