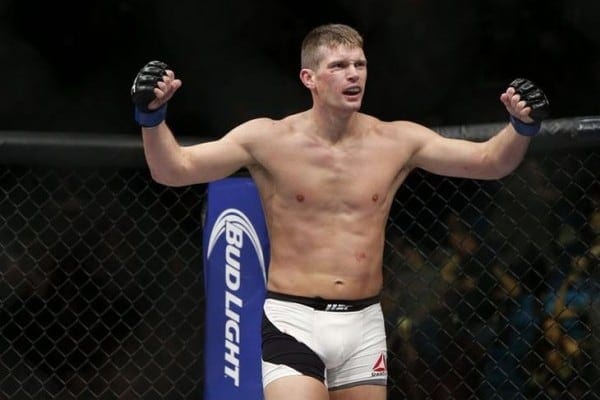 Sage Northcutt (6-0) has been referred to by a few people as Wonderboy 2.0 due to the similarities between him and the original Wonderboy, Stephen Thompson (11-1).

Thompson caught wind of this and mentioned in a recent interview that he agrees with those who are comparing the fighters to each other. Thompson believes they’re similar due to their backgrounds.

“He basically came up the same way I did. He has a close dad as a coach and a karate background,” Thompson told Bloody Elbow.

Since Sage Northcutt defeated Francisco Trevino in a lightweight bout to start his UFC career at UFC 192, fans and media members alike have praised him. To say the least, Northcutt lived up to the hype in his UFC debut.

“I would give him some advice. He had a great first fight in the UFC. With that first round knockout, you’re excited and sometimes the UFC will put you up against a veteran fighter. Maybe he’s not ready for that,” Thompson said.

“He was 5-0, the same as me before I came into the UFC. I had my first fight, a spectacular first round knockout, and then the next fight they put me against Matt Brown (Brown won by decision). I would like to see him work his way up slowly. Just get that Octagon experience before he takes on the high-level, guys.””

After praising Northcutt, Thompson was asked when and who he’ll be fighting next. The #8 ranked fighter in the division can see a fight with #9 ranked fighter Tarec Saffiedine happening soon. However, Thompson made it clear that he’s on the slow path to fighting for the title, not the fast path.

“I’m 32 years old, and I want to make a run for a title and I’ll do it as long as my body will let me. I’m just waiting to see, but I wouldn’t mind stepping into the ring with one of the nine to eleven ranked guys before I make that next step up to a top five guy.”