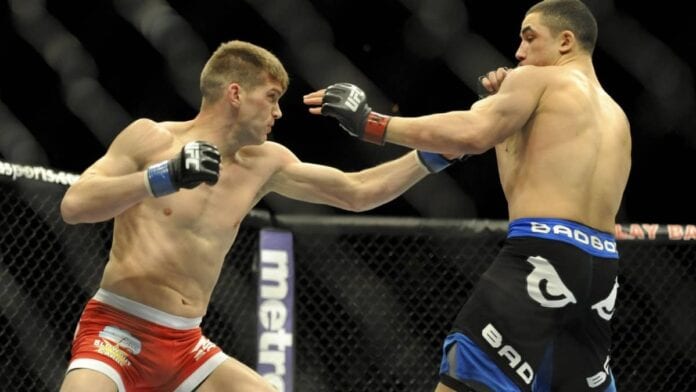 Rising No. 8-ranked Stephen “Wonderboy” Thompson recently scored the biggest win of his career in emphatic fashion, knocking out veteran Jake Ellenberger via spinning back kick in the main event of last July’s The Ultimate Fighter (TUF) 21 Finale.

Although he suffered some injuries after the bout, it seems as if he knows what he wants next, expressing interest in a bout with No. 9-ranked Tarec Saffiedine:

“I would still like to fight Tarec, and my goal is to get back in shape,” he today told MMAjunkie Radio.

With years of karate training to his record, “Wonderboy” is a highly-touted striker, but he has undoubtedly raised his mixed martial arts (MMA) game by training with one of the best in the world in current middleweight champion Chris Weidman.

Thompson touched on his experiences with Weidman, noting that the champion is not only a great person, but a monster in the gym as well, admitting that he has learned quite a bit from the New York native:

“I literally have to go through a training camp to get ready for Chris, because he’s such a monster,” Thompson said. “He’s not just a good fighter, but just a good dude – just his grind that he puts himself through.

“Other professionals, they get down in the dumps and maybe they don’t go to strength and conditioning. Not this guy. He’s got a job, he’s focused on his goals, and he does what he needs to do to get there. I learned a lot for him.”

Despite being one of the 170-pound division’s bright spots, Thompson admits that he’s not yet where he would like to be, expressing his desire to be at the top of the ladder like Weidman:

“I’m not really where I want to be right now,” he said. “I want to be at the top of the game with the belt around my waist, but I’m getting there.”

Also having trained with former long-time welterweight champion Georges St. Pierre in the past, “Wonderboy” has always been surrounded by the cream of the crop, and that’s what he aspires to be. As far as the current champion, Thompson respects Robbie Lawler’s talents, but often visualizes himself in the cage with the “Ruthless” one:

“Robbie Lawler, he’s the man,” Thompson said of the UFC’s reigning welterweight champ. “I always match myself up with him. It doesn’t matter if it’s Robbie Lawler or Chris Weidman. I want to be at that level. That was the same mindset when I trained with Georges St-Pierre, and that was before I started MMA. I always wanted to be the best.”

How far away is “Wonderboy” from a title shot?