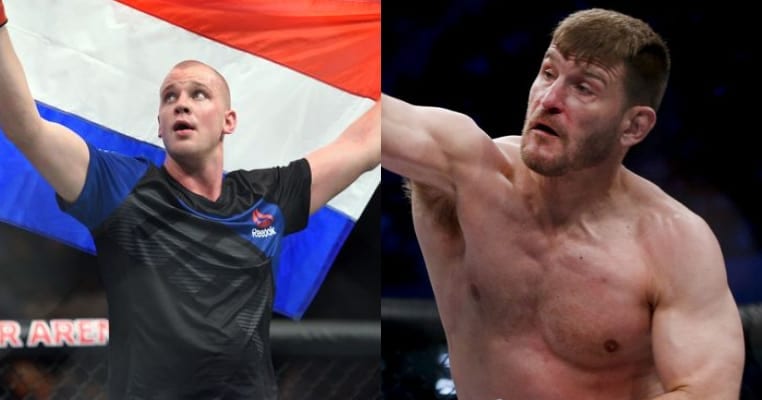 Reigning UFC heavyweight champion Stipe Miocic has been on a tear as of late, winning five consecutive bouts all by way of stoppage. His last defeat came at the hands of Junior Dos Santos in a five round back-and-forth war in Dec. 2014, but he avenged that loss earlier this month by knocking JDS out in the first round of their UFC 211 headliner.

Prior to his 2014 loss to “Cigano”, Miocic hadn’t tasted defeat since being stopped by No. 11-ranked Stefan Struve in Sept. 2012. Speaking at a Q&A session earlier today (May 28, 2017), Struve discussed Miocic’s obvious improvements (Via MMAJunkie):

“I think he’s improved a lot,” Struve said today during a Q&A session with fans ahead of UFC Fight Night 109. “I think he realizes now what he can do in there.”

Struve is riding back-to-back victories over Antonio Silva and Daniel Omielanczuk. He’ll look to extend that winning streak when he takes on Alexander Volkov in the main event of a UFC Fight Night event set for Sept. 2 in Rotterdam.

Despite the improvements made by Miocic, Struve feels as if the champion is still beatable. In fact, “Skyscraper” said that if the two were to rematch, he’d feel as if he would have the ‘upper hand’:

“I think you’ve got to weather the storm (with Miocic),” Struve said. “When I really get comfortable and find my range, then I feel like I’ll get the upper hand if we fight again. … I feel that if I keep him on the outside and just do my thing, then I think I’m his kryptonite.”

The next challenger to Miocic’s throne is currently unclear, although Struve is likely a few fights away from being considered for a title shot. At only 29 years of age, however, Struve could continue to work his way up the heavyweight ranks if he comes out on top in his next fight.

Would you like to see Miocic and Struve rematch at some point in the future?