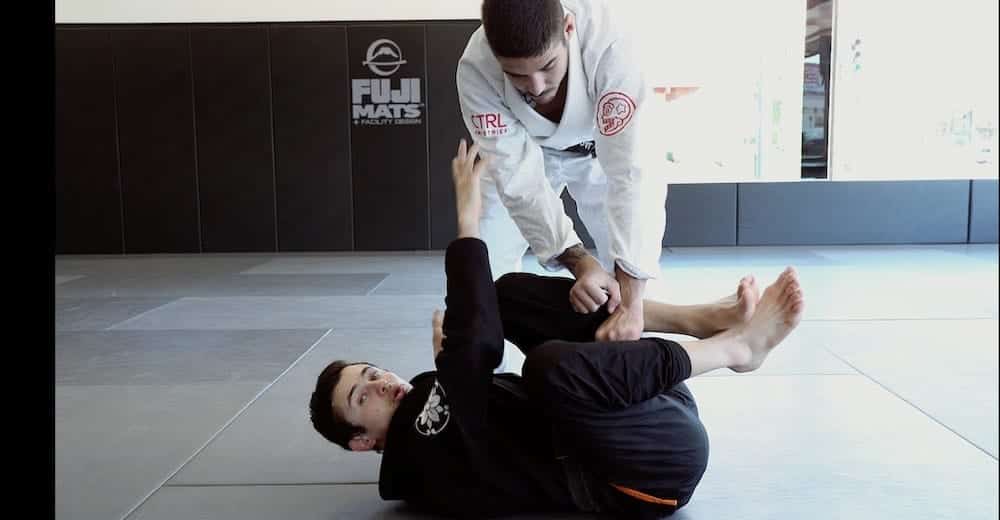 Jiu Jitsu guards have gone through a complete evolution process since the martial art started. In the beginning, there was only the closed guard, then grapplers started developing open guard.

Then from open guard, grapplers started using their opponent’s Gi against them to hold guard. That is how spider guard came to be.

Spider guard is a phenomenal guard that allows various sweep and submission opportunities. Here is everything you need to know about the spider guard.

Wel…l not really everything since you can fill books on spider guard techniques. But here are some great sweep and submission options from the position.

Who came up with spider guard?

Before Jiu Jitsu began developing spider guard, early forms of the technique were used within forms of Judo. Particularly in kosen Judo that has more of an emphasis on ground techniques.

In Jiu Jitsu, no one person is credited with coming up with spider guard. The development was a natural process where numerous individuals innovated the position.

The person that many credit as one of the grapplers to innovate spider guard the most is Mauricio Tinguinha. He doesn’t take credit, but he would use the guard as a solution when fighting a larger opponent.

Since he frequently found himself on his back against bigger opponents, he began using their Gi against them. Grabbing their sleeve and putting his feet on their biceps or hips to make space to do techniques.

Spider guard has become a popular guard in Jiu Jitsu and is constantly being innovated. It has evolved into other guards such as spider guard lasso and various mixes of spider and lapel guard.

How does spider guard work?

The way spider guard works is to create space keeping your opponent away using your feet and their Gi against them. Variations include using sleeve grips, while placing your feet on your opponent’s biceps and hips.

Holding this guard creates space while also creating tension. You use both of these against your opponent that allows you to set up sweeps and submissions.

How to hold spider guard?

Before we get into a few techniques, you need to first know how to hold spider guard. Without having the proper control, you won’t be able to do any techniques from this guard.

First thing you need to know is the sleeve control you need to use. The best grip to use is a 4 finger grip, where you roll their sleeve up using your fingers. Rolling their sleeves up creates a nice pouch for you to hold your grip.

Next is how to hold your feet on your opponent’s arms. The center of your foot needs to be in the crevice of their arm between their bicep and elbows.

Pushing one arm out and pulling the other in. This pushing and pulling allows you to break your opponent’s base and do techniques.

More advanced variations involve putting your foot on their hip, hooking their leg, and using their lapel.

The best position to start to learn spider guard when your opponent is on their knees. You start in closed guard and then transition to spider guard.

Grab sleeve grip on your opponent and hip escape out to bring your feet on your opponent’s hip. Then turn your hips one more time to make space and put one foot on their bicep. Your other foot stays on their hip for this technique.

Take the arm you are controlling and bring it on your opponent’s shoulder. Doing this makes them go off balance and enables you to sweep them.

While you lift their arm up, take your other foot and place it on their knee. As you bring their arm up, making them off balance, then use your foot to kick their knee out.

These motions together allow you to turn your opponent and come out on top.

This next basic sweep also starts from your knees and meshes well with the previous technique.

From your opponent’s knees, hip escape to spider guard with one foot on their bicep and the other on their hip. Use your foot on bicep control to shoot your opponent’s arm up and put your other leg next to their leg.

These motions together take your opponent off balance and allow you to sweep them over into mount.

The balloon sweep is a common open guard sweep that takes your opponent up and over your body. Here is a variation you can do from spider guard.

You’re going to have one foot on their bicep controlling their arm and your other is hooking between their legs. With your other hand, you have a collar grip on your opponent’s Gi.

Use these grips to push your opponent away and instinctively they will come back. When they come back, go under your opponent and use your grips and hook to sweep them over.

One of the easiest submissions you can do from the spider guard is a triangle choke. As you’re pushing on your opponent and they push back, they fall right into the submission.

Start by using your foot on bicep control to push your opponent’s arm out. Naturally they will want to come back and this is where you’ll set up your triangle.

Kick off your bicep control and shoot your hips to the ceiling. Then chop down on your opponent’s neck at the same time you pull their other arm across their body.

For the finish, pull their head down and lock your knee over your ankle.

An arm bar from spider guard comes on fast and is simple to do. Start with your foot on their bicep and your other on their hip. You’ll have one sleeve grip and an elbow grip on the arm you’re attacking.

As you push their arm you have bicep control away, you rotate your hips. When you rotate, use the elbow grip to pull your opponent’s arm in and lift your hips up.

This will allow you to catch a tight arm bar. Even if they defend, you can still go for a nice sweep turning back the other way.

You can do another armbar from spider guard when your opponent is standing. Start in spider guard with bicep controls and turn your hip inward.

If your opponent is standing, they will have pant grips, so you will need to kick one off for the armbar. Change your sleeve grip to a tricep grip and kick your opponent’s grip off.

When you kick their grip off, trap their arm against your body. Then to finish, clamp your knee against their elbow and lift your hips up for the finish.

Going from spider guard and attacking an omoplata is another coming submission from the guard. When your opponent is standing with pant grips, you need to start by kicking one of their grips off.

The grip you kick off is the arm you’ll be attacking. Once you kick their grip off, pull their arm forward and hook it around your hip.

As you hook their arm on your hip, bring your leg over their shoulder. Turn your feet out, control their hips, and sit-up into them to lock on the pressure.

(This video demonstrates the previous 2 techniques along with a triangle.)

A kneebar is another submission option off of spider guard. Here is a method for doing this technique.

You hold this spider guard with bicep control, sleeve grips, and your other foot on your opponent’s knee. Use your foot on their knee to kick their leg out to make space.

This gives you space to rotate your body and place that foot next to your other leg. As you turn yourself, your opponent’s leg goes between your legs.

Catch their leg and hook their heel with your armpit and go right into the kneebar.

Spider guard is a highly versatile guard, you can do numerous techniques from, but need to get the details correct. Here are tips for doing spider guard.