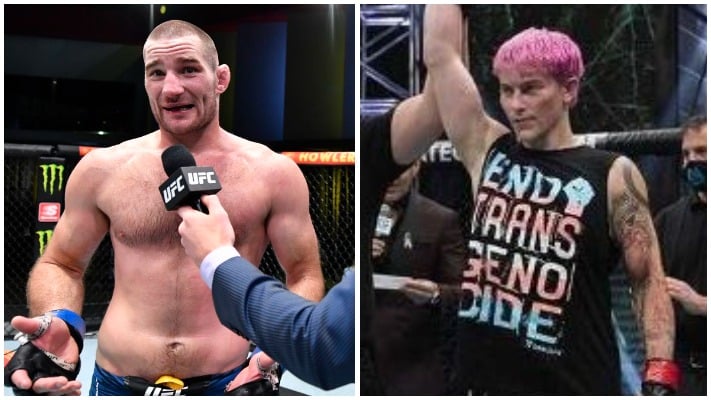 Sean Strickland hasn’t held back when giving his thoughts on Alana McLaughlin competing in MMA.

The transgender fighter debuted with a win at Combate on Friday evening, but the fight was definitely not one-way traffic. McLaughlin survived being badly rocked in the first round before coming on strong in the second to secure a submission win over Celine Provost.

McLaughlin is the first openly transgender Mixed Martial Arts fighter to compete in the USA since 2014.

Since the fight, she has received some flack and taken to Twitter to address the people who believe she is a “cheater.”

Strickland appears to be one of the people with “nasty messages” for McLaughlin. The UFC middleweight contender reacted to the trans fighters’ MMA debut on social media and called for the 38-year-old to “get out of women’s MMA.”

“Change your name, call yourself a woman… but you’re still a fu****g man, get out of women’s MMA, coward,” Strickland wrote on his Instagram story. “This is why the athletic commission is useless.”

“I consider myself a classical feminist,” Strickland added. “If your religion or government has an unequal standard for women then I’m not with it. Testicles at birth == man. Ovaries at birth ==== woman.”

Do you agree with Sean Strickland on transgender fighters in MMA?