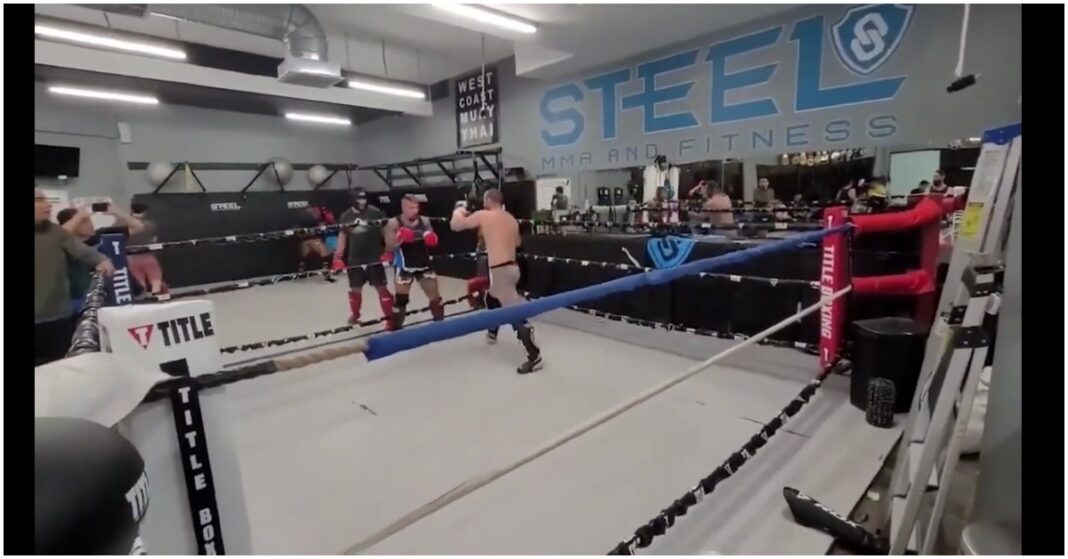 Sean Strickland lands a devastating left head kick to his sparring partner and knocks him unconscious and through the ropes.

Strickland continues to make headlines for being an absolute maniac. He absolutely demolished his sparring partner and wasn’t holding back at all. The video opens up with Strickland just throwing absolute bombs at his partner. The first head kick he landed definitely rocked his partner and the 2nd one was just too much as it turned the lights off on his partner.

Strickland took to his social media outlets to share the video. He said “Don’t ban me Instagram, it was consensual”.

Strickland also recently spoke about how he enjoys his sparring sessions with heavyweight champion Francis Ngannou. They spar against each other with 16 ounce gloves.

In another Twitter gem, he said “bottom line is you put 4 ounce gloves on him in a FIGHT and he touches me once and I will go to dreamland!!!! LOL”. It takes a lot of guts to go in against the heavyweight champion, with any gloves on. Ngannou is arguably the scariest man on planet earth right now.

This will be Strickland’s second headlining bout in a row. His last fight was against Uriah Hall where he was able to win the fight over him via unanimous decision. That win cemented Strickland as a true contender in the middleweight division and the power he has in his hands back that claim up. Strickland is currently on a five fight win streak and I currently the #7 ranked middleweight in the UFC with a record of 24-3.

His opponent Hermansson is a very talented wrestler and he is coming off an impressive win against Edmen Shahbazyan. He won that bout via unanimous decision and improved his record to 22-6.