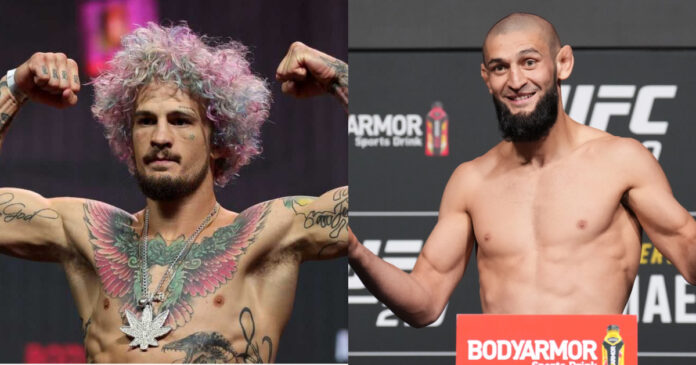 MMA fans were witness to something that they had never experienced before when just 24 hours out from the event, the top three fights on the card had to be reshuffled due to Khamzat Chimaev’s colossal weight miss.

Chimaev tipped the scale at 178.5lbs, 7lbs over the agreed limit for his bout against Nate Diaz. This meant that Chimaev would be pulled from his main event fight and instead took on Kevin Holland. Holland’s opponent, Daniel Rodriguez, then fought Li Jingliang, while Nate Diaz fought Tony Ferguson.

Chimaev’s miss, along with his attitude around it, drew many detractors and was widely criticized for his unprofessionalism. It’s unsure whether his next fight will be scheduled at 170 or 185lbs but there are some deserved questions on whether he will actually be able to make 170lbs.

Via his YouTube Channel, bantamweight contender, Sean O’Malley shared his opinion on the situation, ultimately casting doubt on whether Chimaev will be able to make the cut to welterweight successfully.

“I’ve never in my five-six years in the UFC had a doctor come and check on me during weight cuts,” O’Malley said. “I’m sure if they come look at me the last pound when I’m in the bathtub, they’d probably say to anybody, ‘Whoa.’ Like, a doctor comes in, they’re not used to seeing humans like that.

“I want to see him at 185 because even when he fought Gilbert Burns, he did the towel thing, lost five pounds. When was the last time Khamzat made 170 actually? Not the last two fights so it’s probably been over a year.“

O’Malley declares that he doesn’t believe that ‘Borz’ can make it, adding he may not find as much success should he make the jump up permanently to middleweight.

Do you agree with Sean O’Malley?