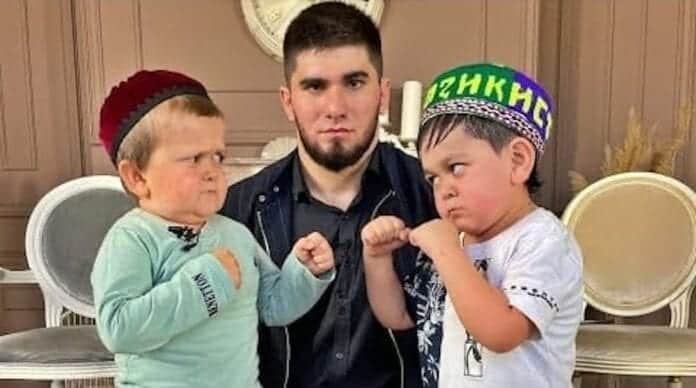 The potential fight, which is expected to be organized by professional mixed martial artist, Asxab Tameav, is currently yet to be nailed down, however, footage of a face-off between Magomedov and Rozik circulated through social media over the last number of days, gaining sizeable exposure.

Magomedov, who is commonly known as ‘Little Khabib’ — in reference to former UFC lightweight champion, Khabib Nurmagomedov, has gained social media exposure over the last couple of weeks, however, the head of Russia’s Dwarf Athletic Association, Uliana Podpalnaya has called the potential mixed martial arts fight between Magomedov and Rozik “unethical” during a recent interview with Gazeta.ru as per RT Sport.

“It’s not even like a show fight — they (Magomedov and Rozik) get paid a lot of money and it’s a show to make people laugh,” Podpalyana said. “There’s nothing serious about this, this isn’t sport. This is unethical, wrong, from my point of view. It seems to be that only on the one hand it can be correct and beautiful — if martial arts among small people are made a Paralympic sport.“

“It could be Judo, Karate, and people will understand that this is a serious sport, serious performances, and not some kind of laughing show,” Podpalyana explained. “Events like this don’t draw attention to the sport of little people. If interest in this appears, it’s only business a lot of money is being invested in it. And from the point of view of the sports career growth of these guys, there are no prospects.“

Magomedov, 18, has gained fame as a star on the social media network, Tik Tok — where he had gained popularity and views for impersonating the above-mentioned, fellow Dagestan native, Nurmagomedov, whom he has been pictured with in the past on his social media.

Both Magoemdov and Rozik suffer from a growth disorder in which their disease makes them appear younger than they actually are, as well as their dwarfism.

Earlier this afternoon, the aforementioned, Tamaev posted a series of video clips on his official Instagram account, that has 4.3 million followers, which show Magomedov super-imposed into various scenarios, such as a goalkeeper saving a penalty, and as two-time UFC welterweight title challenger, Jorge Masvidal during his five-second flying knee knockout win over Ben Askren. Throughout the comment section, many users have reacted with laughing face emojis to the post and video content.