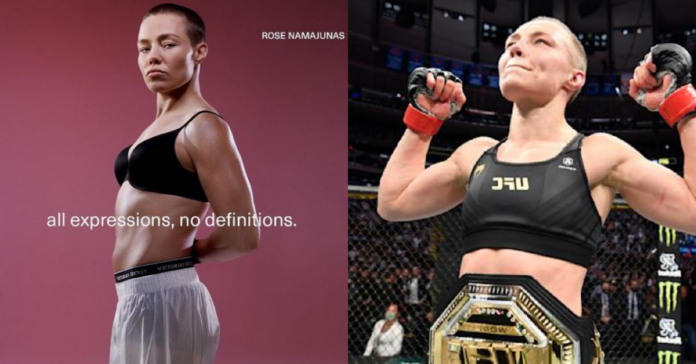 For its new campaign, American lingerie giant Victoria’s Secret has recruited Rose Namajunas for their new ‘Undefinable’ ad push. Namajunas is one of many women working with Victoria’s Secret. The former UFC titleholder photos have been displayed alongside models such as Bella Hadid, and Hailey Bieber in addition to musician Brittney Spencer and Paralympian Femita Ayanbek.

According to Victoria’s Secret, the aim of ‘Undefinable‘ asks:

“For decades, society and institutions—including ours—defined very narrow expressions that represented beauty, sexiness, and self-worth for women. The truth is the only person who can genuinely define a woman is herself. Now, we want to hear from you—tell us, what makes you uniquely #Undefinable?”

‘Thug’ Rose Namajunas posed for the lingerie company, which photos were shared on Instagram:

READ MORE:  Michael Chiesa predicts the return of a former UFC champion: "Rockhold is coming back."

“What makes trailblazer @rosenamajunas undefinable? Her passion to win—again and again (and again). Tell us, what makes you #Undefinable?“

In an interview with Rolling Stone, the MMA fighter Namajunas discussed her point of view when working alongside Victoria’s Secret. She explained:

“This partnership between myself and VS dispels the myth that women look better with tons of makeup or a bunch of fake stuff. Being a fighter has changed my physique for better or for worse, but I am confident nonetheless. That is the most important thing when it comes to beauty and being attractive. There are many different perceptions of female UFC athletes, but I wouldn’t be successful if I spent time paying attention to them.”

Rose Namajunas made her professional MMA debut in 2013 when here was merely aged 20. Over time she earned an impressive record of 11-5 and showed massive maturity and improvement fight over fight. ‘Thug’ Rose earned and defended the UFC Women’s Strawweight Championship in multiple bouts. The US-born athlete also holds notable wins over exceptional fighters such as Weili Zhang, Jéssica Andrade, and Joanna Jędrzejczyk, among others. Despite losing the title in her last bout, she remains a top-ranked strawweight fighter.

This is not Rose Namajunas’s first modeling gig. The UFC fighter posed nude for Women’s Health magazine in 2017. For her naked poses then, she explained:

“My naked body is… the story of my whole life. There’s a lot around us that we can’t control, but my body, my mind, and my soul are pretty much the only things that I can. All the scars on my body, all the bumps and bruises, all the muscles—that is a story of everything I have done. And it’s not just my story. My ancestors who came before me gave me this vessel to sculpt and mold.”