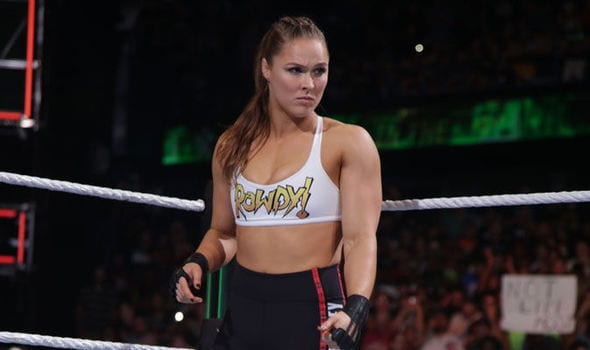 It looks like Ronda Rousey and her husband, former UFC heavyweight, Travis Browne will be starting a family.

ESPN reports that sources close to Rousey confirm “The Rowdy One” is taking time off WWE to try and get pregnant. Rousey fueled the rumors with an Instagram photo of herself and Browne, which she captioned “#impregnationvacation’:

Rousey comes off a WrestleMania 35 loss to Becky Lynch, where she dropped her RAW Women’s Championship in a Triple Threat main event involving Charlotte Flair, who also lost her SmackDown Live Women’s Title in the match. It was the first-ever women’s match in history to main event a WrestleMania.

Now, Rousey will be sidelined for several months with an injured hand. She’ll be using that time off to start the next chapter of her life. Back in a January interview with ESPN, Rousey admitted that she has aspirations to start a family soon:

“I’ve not kept it a secret that I would definitely want to start a family,” Rousey said. “But how do you go about doing that? I love this way more than I thought that I would. So do you just keep going until you just happen to get pregnant?

“Or should you stop and go try and get pregnant? Or is going and trying to get pregnant putting yourself on the spot and then you’re less likely to get pregnant? I’ve never had a baby before, I don’t know these kinds of things. It would be kind of cool to just keep acting and then one day, ‘Hey, surprise twist, I’m pregnant.’

“That would be fun. There’s a lot of things up in the air. A lot of decisions that we’ve gotta make as a family. I’m trying to figure it out as I go along.”