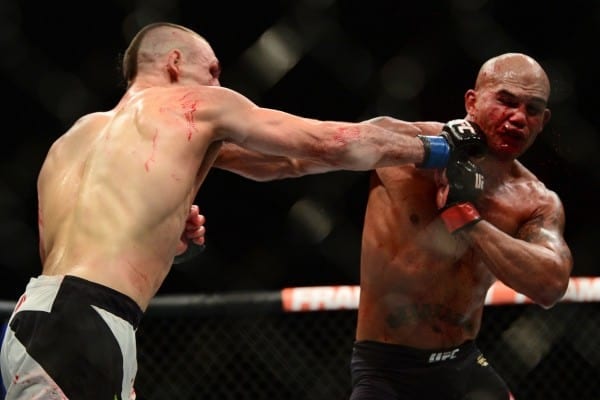 Welterweight champion Robbie Lawler defended his title against Rory MacDonald in one of the best 170-pound title fights we’ve ever seen in the co-main event of last night’s (Sat., July 11, 2015) UFC 189 pay-per-view (PPV) from the MGM Grand Garden Arena in Las Vegas, Nevada.

The insane bout saw a ton of back-and forth action that began with ‘Ruthless’ bloodying the well-rounded MacDonald with a series of bludgeoning combos. But a battered MacDonald came back with a vengeance late in the third round, hitting Lawler with some devastating head kicks to turn the tide in his favor and nearly finish the bout.

Although it looked like the champion would fail to defend his belt, somehow Lawler persevered to get a finish in the final round when he nailed ‘The Red King’ with a fight-ending straight shot on his already broken nose. It was an epic win that defined Lawler’s reign as champion in one of the most historic divisions in the UFC.

Check out the full fight video highlights of his latest win right here: