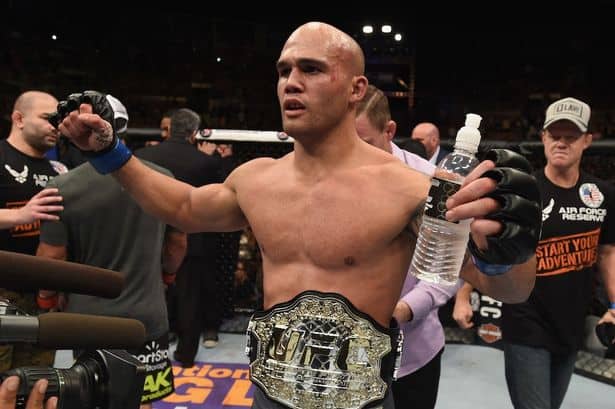 The huge welterweight title fight at UFC 194 that exploded in to the headlines this morning has been confirmed. News erupted on the the internet during a sensational day of media coverage in MMA (mixed martial arts), and it all started from one Tweet. Jeremy Botter of Bleacher Report threw the hook out, and yours truly got the word going here at LowKickMMA.

Once again, as per our good friend Jeremy Botter on Twitter:

The news was coat tailed by another huge 170-pound clash, as Johny Hendricks and Tyron Woodley were also paired for the reported December showdown. Earlier reports of ‘Bigg Rigg’ and ‘Ruthless’ being tabbed for a trilogy-maker were obviously premature, and it seems like ‘The Chosen One’ is being overlooked once again for a title fight.

Let’s look at that statement though; Hendricks himself was once 10 wins deep in to his UFC run before being granted a title shot, and had only one loss under the Zuffa banner, Woodley is currently on a two-fight streak, and is 4-2 from his last six bouts. Although he may feel differently, let’s not act like ‘Rigg’ didn’t have to string together a lot more before getting his crack at the belt.

As far as Hendricks himself is concerned, after being heavily linked to the rubber match with Lawler, it’s understandable if he is feeling a little frustrated right now. The result should mean two extremely hungry, and potentially pissed off contenders colliding in a very pivotal number one contender fight. That can’t be bad.

UFC 194 is set to go down in Calgary, Alberta, Canada on December 5th. Both Hendricks and Woodley are still clear options as replacements in case either the champ or ‘NBK’ falls injured.