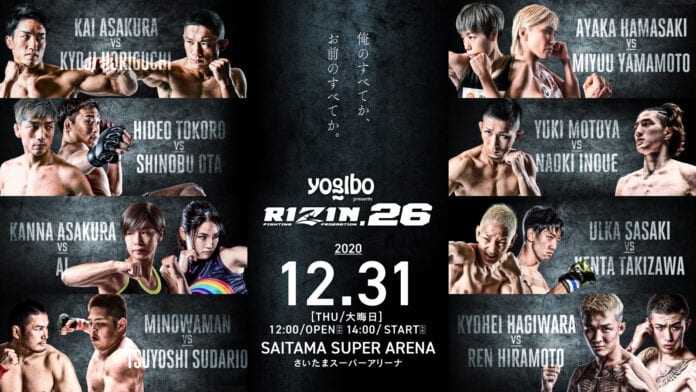 RIZIN FF is known for putting on epic New Year’s Eve events, and even amid a global pandemic, the Japanese promotion appears set to continue that tradition. RIZIN 26 takes place on Thursday, December 31, inside the Saitama Super Arena. This event will mark RIZIN’s 5th anniversary and the 6th NYE event since its launch in 2015.

A rematch between Kai Asakura and Kyoji Horiguchi will headline the eight-fight card. The pair last faced off at RIZIN 18, with Asakura finishing Horiguchi in less than two minutes. This time around, the bantamweight title will be on the line, and Horiguchi will no doubt be aiming to put on a better performance.

The bantamweight title will not be the only strap fought over on the night. Ayaka Hamasaki and Miyuu Yamamoto will compete for the vacant women’s super atomweight championship. The title was previously held by South Korea’s Seo Hee Ham, who vacated the belt earlier this year.

Thankfully, if injuries do impact the title fights in any way, RIZIN has given itself plenty of back-up options. RIZIN 26 will feature four bantamweight fights in total and two women’s super atomweight contests. Former UFC fighter Naoki Inoue will be action. The 23-year-old made his promotional debut earlier this year at RIZIN 21. He has now racked up two straight wins and will be looking for his third victory under the RIZIN banner when he meets former DEEP veteran Yuki Motoya.

Here is the full card for RIZIN 26.