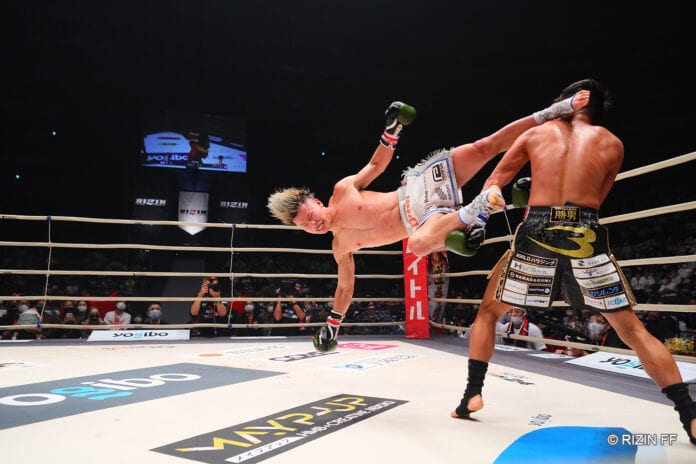 Japanese kickboxing sensation Tenshin Nasukawa put on a blistering performance at RIZIN 24, totally outclassing his opponent Koji Tanaka. The pair faced off in a catchweight kickboxing bout in the main event of RIZIN 24, which went down inside Tokyo’s Saitama Super Arena on Sunday, September 27.

This fight was Tenshin’s first under the RIZIN banner since the promotions New Years’ Eve show last December. In Koji, he was facing a kickboxing veteran who had captured multiple titles across multiple promotions.

Tenshin came out in the opening round, looking like he had something to prove, and immediately took the fight to Koji, landing impressive punch combinations as well as a flying knee. The RIZIN newcomer ended the round with a cut above his left eye and swelling on his face.

Koji had some minor success at the start of the second, landing a solid right, but the attacking arsenal of Tenshin meant he was never really in the contest. The year 31-year-old was buffeted by a dizzying array of attacks ranging from airborne spinning kicks to brutal punch combinations.

When the judges’ decisions were called out, there was never any doubt that Tenshin would be the one to have his arm raised.

In the co-main event, RIZIN bantamweight champion Kai Asakura demolished Shoji Maruyam in the opening round of their non-title clash. After dropping Maruyam with a straight right, the 26-year-old sealed the deal by landing a massive soccer kick to the head of Maruyam as his opponent tried to get back to his feet. At this point, the referee wisely stepped in to save Maruyam from taking any more unnecessary damage.

Earlier in the night, fan-favorite Rena scored a unanimous decision win over Emi Tomimatsu in their strawweight clash. Rena’s standup game was too strong for Tomimatsu, who was making he RIZIN debut. The 38-year-old Tomimatsu did experience some success on the ground, but not enough to impress the judges.