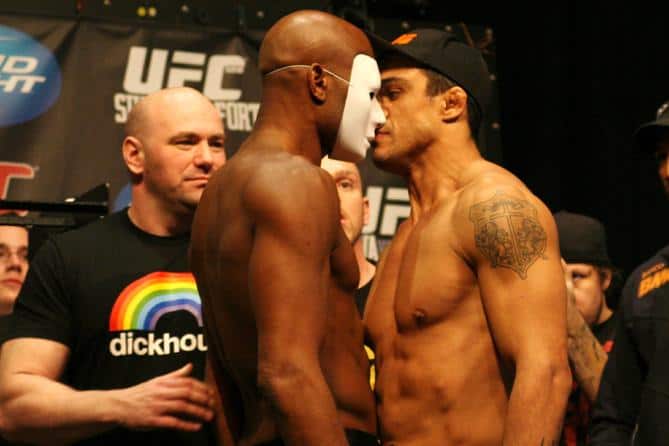 It may not surprise you to learn the location of Anderson Silva vs. Vitor Belfort 2, as they have a very sketchy drug testing history there….

Former champions and Brazilian striking legends Anderson Silva and Vitor Belfort share a lot of common ground in recent MMA history. They both been involved in failed drug tests, albeit perhaps the fifth of Belfort’s career and the first of Silva’s, but they’ve both been experiencing a massive downswing in terms of their public image.

Although ‘The Spider’ won a decision over Nick Diaz at UFC 183, the result was soon overturned when Silva faced the NSAC (Nevada State Athletic Commission) with his blatantly concocted excuse for failing the drug test for anabolic steroids. A recent deadspin.com article released about Belfort’s allegedly failed UFC 152 dope test further led to the opinion that ‘The Phenom’ is anything but an organic force.

The recent news that the two may rematch in 2016 has been added to by GracieMag.Br’s recent post:

Anderson Silva already has a date , site and opponent confirmed for his return after the punishment for doping , says journalist. The columnist Lauro Jardim , the jornaloglobo , said the spider back to fight in the HSBC Arena in Rio de UFC March 5 . His opponent will be the same Rio Vitor Belfort , who returns to fight in his hometown . The official announcement should be made ​​even in November. Stay tuned

There’s been no official confirmation of the date for the proposed fight, but March 5th would indicate the date of UFC 197, which is set to go down in Rio De Janeiro, Brazil. Note that Belfort’s last five fights have been four in Brazil, one in Las Vegas, Nevada. Although he hasn’t offically failed a drug test since 2014, there has as previously mentioned been a ton of controversy regarding Belfort’s status.

This isn’t to say that both men won’t come in clean to their second fight of course. Silva spectacularly destroyed Belfort with a highlight reel front kick to the jaw when they first met in 2011 at UFC 126, so it will be interesting to see how it plays out this time.