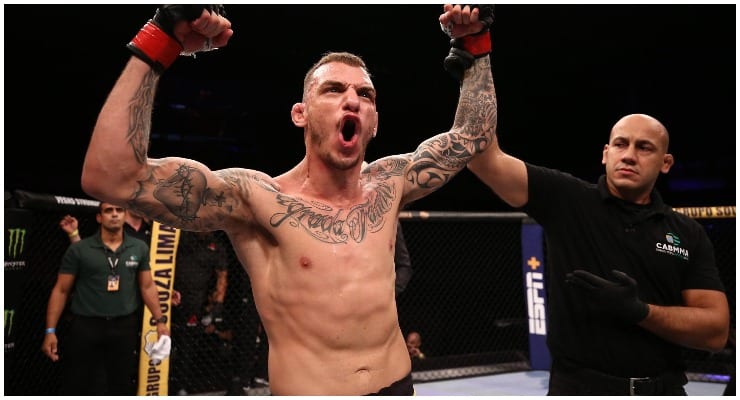 Renato Moicano is targeting a ranked opponent next.

Moicano returned to the win column with an impressive and dominant victory over Jai Herbert at UFC Vegas 30 last night. Dominating the Briton on the ground, Moicano eventually sunk in the rear naked choke in the second round to get the tap and he was pleased to say the least.

“I felt like I had to go out strong and get a submission or a finish,” he said afterward (via MMA Junkie). “That was what I trained to do and that’s what I did, fortunately. … I was just so happy he tapped.

“I don’t even know how to explain it, what it’s like to win a fight. To me, it’s the best feeling in the world and I’m going to be feeling like this one week from now. I’m really happy.”

Now 2-1 at lightweight, the former featherweight contender wants to break into the top 15 at 155 pounds. He has two specific names in mind as well.

“My next fight will be against a top 15 (opponent), for sure,” Moicano added. “I keep asking the UFC for the best. I want the best names they can give me, and that’s what I’m looking for – guys like Islam Makhachev, (Gregor) Gillespie, all those guys.

“The best wrestler, the best striker – it’s even better for me. I want to fight the best.”

Whether he gets those names remains to be seen, but Moicano is definitely a fighter to be reckoned with at lightweight.

Who should Moicano fight next?