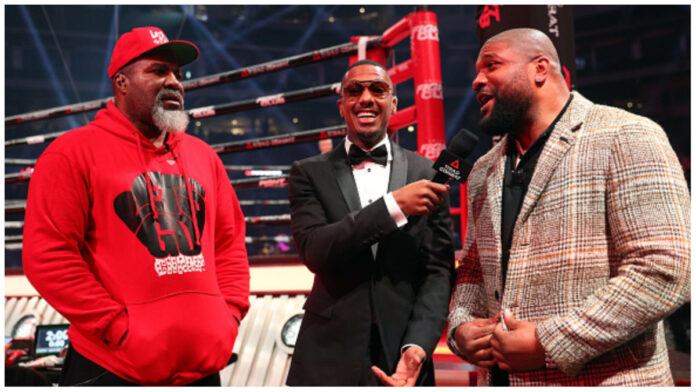 Quinton ‘Rampage’ Jackson has recently given some advice to Jon Jones regarding his heavyweight debut while also admitting to a few doubts he has about Jones’ chin at the new weightclass. Jackson also detailed his plans for the remaining twilight of his legendary career, spilling the beans that a foray into boxing might be on the horizon soon.

“Honestly, no cap, Jon Jones is the best person I ever fought,” ‘Rampage’ told a TMZ reporter. “I don’t think I can give him advice, he’s a better fighter then me.”

“I don’t know about Jon Jones‘ chin,” he continued. “There’s been rumors that he doesn’t have a strong chin. Some of them heavyweights man, they hit harder. I feel like Jones is a smart fighter. It was really hard for me to hit him, he wouldn’t let me hit him… Granted, Jones is a dirty fighter, when you get close to him he’s gonna poke you in the eye and kick your knee backwards… Heavyweights, they’re different monsters man. They hit hard.”

Soon, the tide of conversation turned to ‘Bones’ and the quality of opponent he should face on his return. ‘Rampage’ Jackson was deadset on his answer, claiming that Jones truly needs a warm-up fight to adjust to the new division and shake off any lingering ring-rust.

“I would say his first heavyweight fight he should do a warm up. He shouldn’t go in there with the big boys… He should fight somebody like 230lbs. He don’t wanna fight nobody like 265lbs… Not your (Jon Jones’) first fight (in the new division).”

“I ain’t done,” Jackson continued, talking about his own career now. “Im not happy with my performance my last fight. I can’t leave the MMA fans like that… Im in talks with fighting Shannon (Briggs), that fights been like almost a year in the making.”

A professional MMA fighter for over 20 years now, ‘Rampage’ continued to elaborate on his future, indicating that his battle-tested body may be a little too worn down for any MMA fights. Although he would go on to say that such a thing isn’t quite out of the realm of possibility.

“I wanna do some boxing before I retire… I might do MMA… I wanna do boxing. Im getting up there, I’m 44 now man,” ‘Rampage’ concluded, also mentioning that wrestling and his old knees just don’t mix anymore.

Who would you like to see ‘Rampage’ Jackson box, or should he just retire?