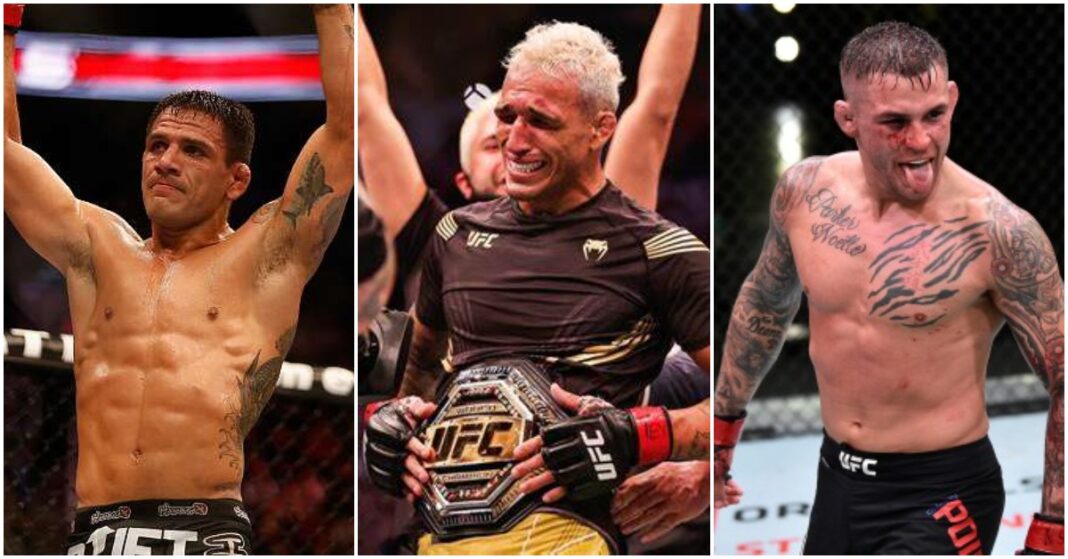 During an interview with RT Sport MMA, dos Anjos opened up about the landscape of the lightweight division.

“I see Charles Oliveira finishing Dustin Poirier. If Charles is trying to exchange with him, he has a chance of losing that fight; a little chance cause he can get caught. But Poirier is not very hard to take down. It’s not very hard to take Poirier down. And I think Charles is going to manage to take him down. They’re gonna scramble, and Charles is gonna finish him. Because we see in the past, his submission, his ground game skills are not on the high level. He’s a good fighter, good stand-up fighter, but he’s not very good on the ground.”

He also added that: “He got a good mindset right now. He’s coming back-to-back with a lot of wins, and it builds up your confidence. So, it’s good. I think Charles – with all due respect to Dustin – but he’s gonna go through him. I think Charles is gonna win; gonna keep the belt.”

Rafael dos Anjos is looking to fight again in either January or February, with him having to pull out of his highly anticipated matchup with prospect Islam Makhachev due to a knee injury.

The “Diamond” has had a taste of UFC gold, with Poirier becoming the interim lightweight champion after beating featherweight great Max Holloway in 2019.

However he was unable to unify the belt with the champion Khabib submitting him in the third round.

Poirier did bounce back winning a slug fest unanimous decision against Dan Hooker, then with back to back wins over the former lightweight and featherweight champion Conor Mcgregor the “Diamond” had solidified himself as the number one contender.

But standing in Dustin’s way of UFC greatest is the lightweight champion Charles Oliveira, who has the most submission wins in UFC history as well as, being on a nine fight win streak with win’s over former interim champion Tony Ferguson and former Bellator champion Michael Chandler.

Who do you think will win the UFC lightweight title?