LowKickMMA.com
Home UFC News Quote: Cruz Will Beat Faber Worse Than Ever Before 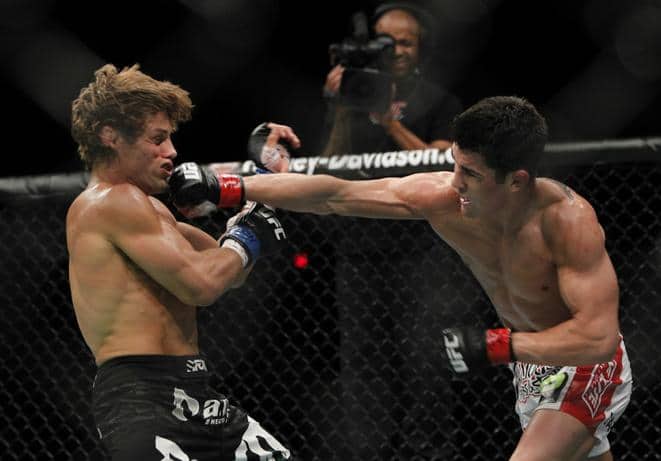 Dominick Cruz (21-1) returned in a big way at UFC Fight Night 81 when he beat T.J. Dillashaw (13-3) to regain the bantamweight title. Now, the UFC as some options on the table for his first challenger. It’s no secret that Cruz was dealing with a foot injury going into the fight this past Sunday night so all of the options that the UFC has will be determined by how long Cruz will be out.

Former UFC fighter and current FOX Sports analyst Kenny Florian have been in the news for his plagiarized article about Cruz before UFC Fight Night 81. Florian once again made headlines when he looked at the UFC’s options for Cruz’s next challenger. The UFC could give T.J. Dillashaw a rematch for the bantamweight title, which would make sense or the UFC could make a trilogy fight between Cruz and Urijah Faber, who have no love lost for each other. Faber and Dillashaw have been very vocal about wanting the next title shot while Cruz has gone on record by saying he doesn’t care who he fights next.

Florian explained on a recent edition of his podcast that he believes if the UFC gives Faber another chance against Cruz then Faber will be beaten worse than ever before because Faber has not improved that much since their last fight, which was at UFC 132.

“I think the guy most deserving [of the title shot] is Dillashaw. Listen, I love Urijah Faber, I really do, I just don’t see that fight being close between he and Dominick. I just don’t, if I’m being honest. I think the last fight [at UFC 132 in 2011] was semi-close, but really it was just Urijah scrambling his brain to try to find out where Cruz was going to be in that cage.

“It’s going to be even worse this time around. Urijah really hasn’t changed that much. I don’t think he’s changed too much from the WEC days. Cruz just continues to get better. I don’t think there’s anyone else at 135 pounds who is close besides T.J. Dillashaw.”

You can listen to the podcast here:

What should the UFC do? Should Faber get another shot? Let us know.