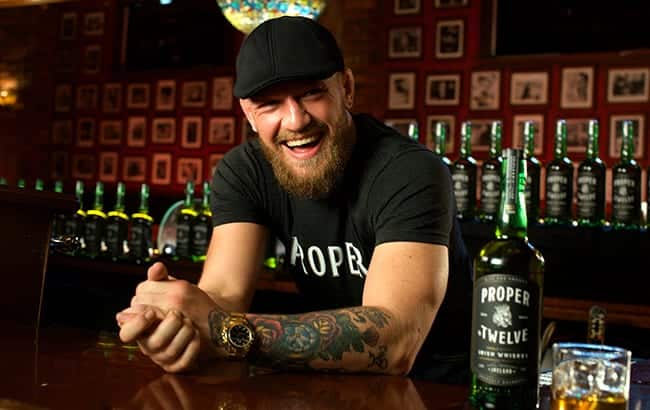 Proximo Spirits have become the majority stakeholder in former two-weight UFC champion, ‘The Notorious’ Conor McGregor’s whiskey brand, Proper Twelve — in a deal estimated to be worth in excess of a cool $600 million.
The 32-year-old Crumlin native is set to remain as a face for the brand as well as remaining in an ownership position.

According to The Mac Life, the agreement struck is considered to be a re-evaluation of a prior arrangement between the two.

Mike Keyes, the CEO of Proximo Spirits released a statement to Shanken News Daily, claiming that the brand continues to grow and develop at an “unprecedented” rate, labeling the whiskey as the most exciting to come from Ireland.

“Since introducing this brand with Conor (McGregor) and his partners just two and a half years ago, Proper No. Twelve has been the most exciting brand in the Irish whiskey category.” Keyes explained. “The brand continues to grow at an unprecedented rate, and this agreement reflects Proximo’s commitment to expanding its presence in the whiskey category as a whole.“

“It’s hard to predict how long it’s going to take, but I’m looking at a million cases and saying that’s a starting point for this brand,” Austin said. “Conor is very, very fixated on this being a multi-million case brand. I wouldn’t count him out ever.“

In a statement provided to The Mac Life by McGregor himself, the Dubliner explained how he wants to take Proper Twelve to the “pinnacle” of all spirits, not only whiskey.

“Proper Twelve is my baby for life!” McGregor said. “I’m only warming up the barrels here. What I have in store for you all will not only take Proper Twelve to the absolute pinnacle of Irish whiskey, but of all spirits.“

Whilst the Straight Blast Gym staple is continuing to roll in his revenue outside the Octagon, he’s got a July 10th. lightweight rubber match trilogy with former interim lightweight best, Dustin Poirier booked for UFC 264 from a sold-out T-Mobile Arena in Las Vegas, Nevada.