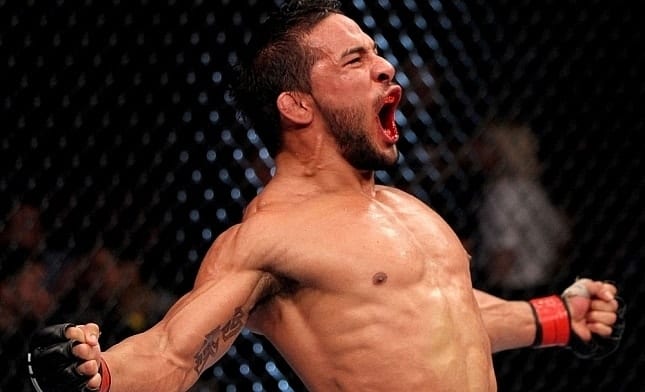 Dennis Bermudez vs Ricardo Lamas is interesting for so many reasons…..

UFC 180 is set to go down this Saturday (Nov. 15th, 2014) and will be headlined by a goliath interim title bout between Mark Hunt and Fabricio Werdum. Somewhat flying under the radar this fight week are featherweights Dennis Bermudez and Ricardo Lamas. “The Bully” and “The Menace” square off on the PPV main card, right before the co-main event (Ellenberger vs Gastelum).

The 145-pound division is a dangerous place to be right now, and the top contenders truly have it all to gain and lose. Lamas went 4-0 in the UFC to gain his UFC 169 title shot against Jose ALdo, but lost in a one-sided decision. He since returned to action, winning a decision in June against Hacran Dias. Bermudez is unbeaten in seven fights, and resides at #7, as compared to Lamas at #3 in the rankings.

In a fight that has massive implications in the title race, especially seeing as “The Menace” would be on eight straight if he wins, who do you think will win? Bermudez certainly has the advantage of being faster on his feet, in my opinion, and I also believe that his wrestling is better than what “The Bully” can offer up.

I’ll save my exact prediction for closer to the time, for now though, have a vote on who you think wins……