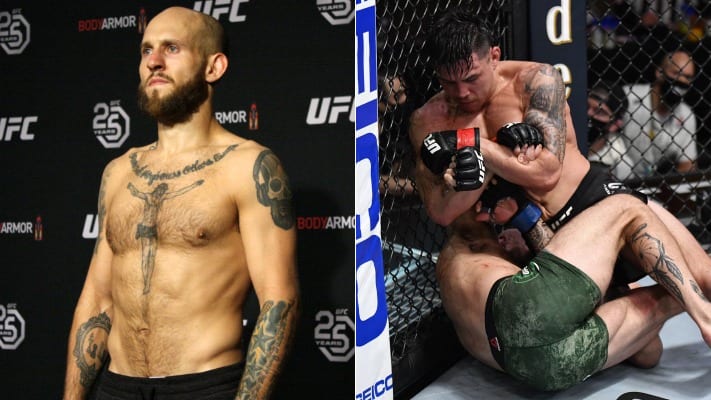 One of the standout matchups from UFC 258 was between bantamweights Brian Kelleher and Ricky Simon. The two natural 135ers both meet at 145lbs, in an exciting back and forth war. Simon was eventually crowned the victor, as his relentless wrestling secured him the unanimous decision.

During the first round, Kelleher received a brutal cut, that the commentators initially believed to be due to the power of Simon’s triangle choke attempt. However, it was later revealed to be the result of a series of brutal strikes delivered by Simon. The cut was not deemed so bad as to stop the fight, although a post-fight Twitter post from Kelleher indicates differently. The graphic image of Kelleher receiving treatment was partnered with the caption “Scar too deep for a bandaid solution”.

Kelleher appears to have taken the loss well. The cut will likely lead to a lengthy lay off for him, however there is not doubt we will see him in the UFC octagon again.

Alternatively, Ricky Simon is going from strength to strength. He is currently riding a three-fight win streak, having also defeated Ray Borg and Gaetano Pirrello. He also holds a submission victory over Merab Dvalishvili, who is currently one of the biggest bantamweight prospects. It stands to reason that he is deserving of a fight that would see him break into the rankings next.

What were your thoughts on the matchup between Brian Kelleher and Ricky Simon? Let us know in the comments.