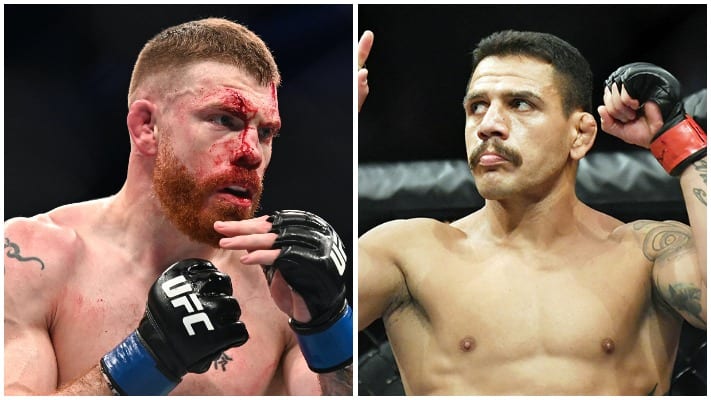 In the UFC Vegas 14 main event, we have what should be a fun fight. Paul Felder stepped up on just five days’ notice to face off against former 155lbs champion Rafael Dos Anjos. Who’ll win? Let’s see what the LowKickMMA staff think…

Jordan Ellis: I think this will be a really fun and competitive fight but I’m picking ‘RDA’ to win for a few reasons. Firstly, he’s had a full camp to train whereas his opponent has not. The Brazilian has a much more varied game and I can see him winning in a variety of ways. Also, both men are 36 but have very different attitudes towards fighting right now. Felder keeps talking about retirement while Dos Anjos keeps talking about getting another title shot. I think he’ll look good in his first 155lb fight in years and ultimately stop Felder in the fourth or fifth round.

Karim Nathan: I’m really looking forward to this one, I think we got a better main event stylistically than the one originally scheduled. Felder always brings it and he never backs down even if he just took it on 5 days notice and we all know RDA is game for whatever fight, just look at the killers he faced. I believe Felder will come out strong and look to the end the fight early and might take the first two rounds but then fatigue will ultimately kick in and RDA will start using his wresting and win the latter rounds. I feel this ends as a 48-47 to RDA

Abhinav Kini: Usually, I would pick Paul Felder given the recent performances of Rafael dos Anjos. However, Felder taking this on short notice, it being a 25 min fight and the fact that he isn’t primarily a wrestler makes this very interesting for me. The last time Dos Anjos lost to a predominant striker was Tony Ferguson and that was 4 years ago. I have RDA edging it by decision.

Ryan MacCarthy: Both of these fighters absolutely deserve an applause for taking this fight on the short notice they did. This is one of those things where fighters fight and both are showing they’re real fighters. I see Felder getting a finish in the later rounds. The only reason because I think you’re gonna see a really really loose, relaxed, and confident Felder. He’s doing it because he wants to. Rafael Dos Anjos is in a position where he has to. RDA has been preparing for a grappler this whole and now has to fight an elite level striker who happens to be extremely relaxed and loose. A loose and relaxed fighter is a dangerous fighter. Felder by TKO in the 4th round.