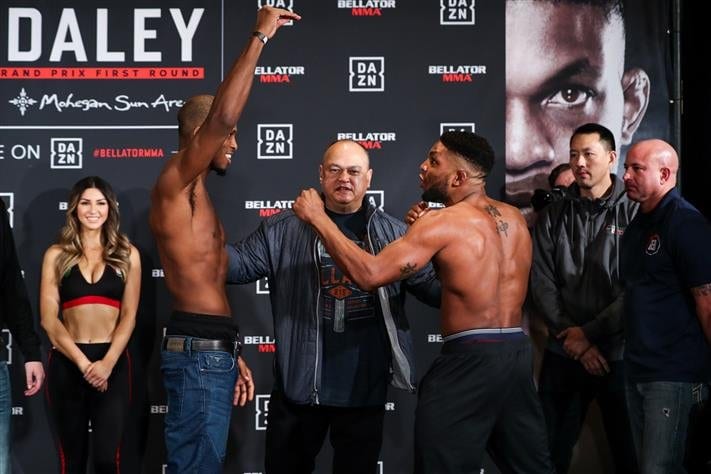 Michael “Venom” Page racked up another impressive knockout win over the weekend, but former opponent Paul Daley was not impressed in the slightest.

Page headlined Bellator London opposite Giovanni Melillo, who Page toyed with for the majority of the first round before putting him away with a nasty knockout. It was Page’s second-straight knockout win since suffering the first defeat of his mixed martial arts (MMA) career, a second-round knockout loss to Douglas Lima.

Speaking to MMA Junkie, Daley had some harsh criticism for the matchmaking Page has been receiving thus far in his MMA career, with a record of 16-1, and only having faced two truly notable names in that time in Lima and Daley.

“This is ridiculous,” Daley said. “You can’t continually beat these kind of opponents. Yes, he knocks them out, but he’s expected to knock them out. What does this prove, the fact that he knocked out a guy nobody will remember? It proves nothing. It proves nothing at all. Why didn’t he do that to me? Why didn’t he do that to Douglas Lima? Because he’s not of that caliber.

“I need to see more from Michael Page, in my opinion, whether it’s a rematch with me or a rematch with another top-tier fighter. Does a win over this guy warrant a title shot? In my opinion it doesn’t. Yes, he’s a star. Yes, people love him. But can he really fight? The two times he’s stepped up, on paper, he’s got a ‘victory’ over me.

“Most people, including me, thought he lost that fight. Second time he stepped up against the champion, who I went three rounds with, he gets knocked out cold. So he needs to fight solid opponents instead of feeding him these guys.”

Page and Daley fought back in February of 2019. It was a fairly uneventful bout, but Page was given the winning nod via unanimous decision. Daley believes he should’ve won the fight, and is open to a rematch in 2020, but wants the stakes raised.

“He couldn’t do what he normally does to everybody else (when we fought),” Daley said. “In my mind I thought I won that fight. The only way to make it more convincing to everybody else is to take him out before the judges. If that fight is going to happen it needs to be a big fight. It needs to happen here in 2020, at Wembley in 2020.”

What do you think about Daley’s criticism of the competition Page has been receiving?