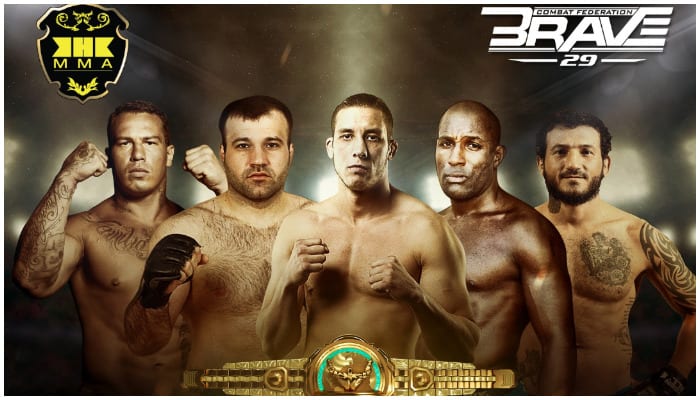 It may sound like something from a 1980’s action movie, but the prizes on offer for the inaugural KHK World Championship are anything but make-believe.

The open weight four-man knockout tournament, running over the course of one night, is set to be part of BRAVE CF 29, taking place on Friday, 15 November, in the Gulf-state of Bahrain.

After sifting through hundreds of applications, the event organizers have narrowed the field down to five fighters, with one fighter set to be an alternate. Russia’s Azamat Murzakanov, Brazil’s Guto Inocente, Frenchmen Malik Merad, and Moise Rimbon, as well as Lebanon’s Mohammad Fakhreddine, are the five athletes who have been selected.

The announcement of the semi-final pairings, along with the name of the backup fighter, will be made in the coming days. It’s an eclectic group made up of different styles and weights, which should make for an exciting night of combat.

News of the tournament broke back in September, after an open call for fighters was put out by BRAVE CF and KHK MMA. The only requirement for applicants was that they must have fought at least once professionally.

KHK MMA is a growing martial arts organization based out of Bahrain and founded by His Highness Shaikh Khalid bin Hamad Al Khalifa. While KHK MMA and BRAVE CF are closely linked, the idea for the KHK World Championship was to extend the invitation to all fighters regardless of who they are signed to.

The winner of the tournament will not only take home US$100,000 in prize money but will also have the right to hold the KHK belt. However, a word of warning, whoever captures the strap may need to check their baggage allowance as the gold-covered belt weighs in at an impressive 6.2Kg.

The winner will also get the opportunity to defend the belt the following year. To make the prospect of defending the title more enticing if an athlete wins the tournament consecutively three times or on five separate occasions, they will earn the right get to keep the belt permanently.

It will be interesting to see how this year’s tournament unfolds and also its development over the coming years. While it may be a long way off, the thought of fighters from different promotions being allowed to compete in a tournament like the KHK World Championship is one MMA fans would likely get behind.