Oleksandr Usyk will use some of his money that he earns from the Anthony Joshua rematch to fund some of the relief efforts in the Ukraine.

Usyk beat Joshua in September of 2021 when he unified the world champion belts. He beat Joshua by unanimous decision and continued his undefeated streak while handing Joshua just his second loss of his career.

This fight means even more for Usyk, as he is fighting for his country as well. Ukraine at the moment is being attacked and invaded by the Russian government. Many citizens have taken up arms to defend their home and Usyk was one of those people brave enough. He joined the defense of the Ukraine and was granted leave time to train for his second fight against Joshua. t’s looking as if the fight may happen sooner rather than later, and could happen this summer.

Usyk will be selling around 2,000 NFTs that will go to his charity, The Usyk Foundation.

“Many people in Ukraine are now seeking help,” Usyk said, “We think that as soon as it’s released, many people will actually receive this help – people who actually need it.” (Transcribed by BSNSports)

Usyk will be teaming up with a designer named Dosbrak to make these NFTs that will be released in the lead to his rematch. Dosbrak had worked with other fighters like Conor McGregor in the past as well. To go along with the NFTs, two random buyers will be granted tickets to the fight as well. 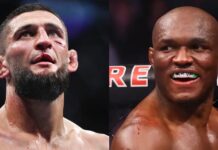